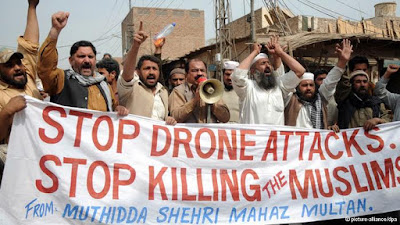 I was stunned by the editorial that appeared in the October 19, 2016 edition of The Mercury News. I was particularly amazed by its headline and the editorial's first couple of paragraphs:

The news that the Islamic State utilized a drone with explosives to kill two Kurdish fighters should send chills down the spine of America. Terrorists must be salivating at the notion of suicide bombing without suicide.

The Islamic State has deployed drones for reconnaissance missions in the battlefields of northern Iraq, but last week’s attack marks its first documented use of a drone as a weapon in combat.

Please note the use of the word "its" in paragraph two. The recent attack was the first documented use of a drone by the Islamic State as a weapon in combat.

Where, I wonder, did the Islamic State get the idea that they could use drones as a weapon in combat? Maybe the fact that the United States has killed thousands of people using drones gave the Islamic State that idea. Could that be it?

Click this link for a graphic representation of the deaths caused by U.S. drones in Pakistan. The estimate from this website is 3,341 deaths. The photo at the top of the page, from the Center For The Study of the Drone, at Bard College, indicates that drone victims in Pakistan have been begging the United States to stop the killing (with no positive response from our country).

How nice, then, for The Mercury News to advocate for the development of "international standards for use of lethal force outside traditional battlefields." It would certainly be a good thing to establish such standards, and to stop the use of drones as weapons. But let's be honest; the Mercury's outrage should be directed against the United States government, not the Islamic State.

We all know about the Golden Rule, right? The Golden Rule is most often articulated using words from the New Testament (Matt. 7:12):

Do unto others as you would have them do unto you.

There is a corollary to the Golden Rule, the sad truth of which is demonstrated by our historical experience through centuries of wars and depredations:

When you do something to others, they're going to do it right back.


The Mercury got its headline wrong. The right way to put it is this way: