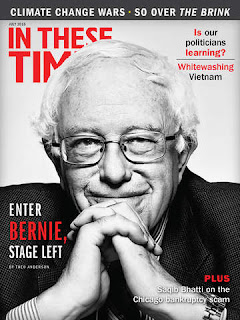 In These Times is modeled on the Appeal To Reason, a weekly newspaper published in the Midwest from 1895 to 1922, a publication that helped support and bring about many of the political successes of the Progressive Era.

I just read the 40th Anniversary issue of In These Times, the November 2016 issue, and I say, click this link: Subscribe!

"Signing up" means getting engaged.

Unless you think that the outcome of this year's presidential election is going to solve this nation's problems (and I sure don't), then you will have to conclude that there is a lot more work to be done before we can achieve the kind of "political revolution" that is absolutely necessary if democracy is to survive, if income and racial inequalities are to be overcome, if we are to stop our destructive addiction to perpetual war, and if we are to terminate our blind assault on the Natural World, which is now a most clear and present danger to the continued existence of human civilization.

Times are changing, and it's time for us to make the political changes we need, instead of letting the momentum of past political mistakes "make us" (miserable, poor, dumb, and downtrodden).

To coordinate our efforts, we need to "read all about it," even as we work to "just do it."

I am feeling really optimistic.