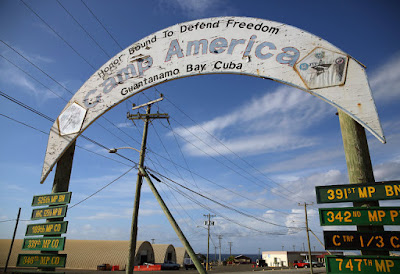 Candidate Obama promised voters that he would close the Guantánamo prison. President Obama is finally getting around to that job, during his last few months in office. The picture above is from a New York Times article published on August 16th. The article documents the transfer of fifteen Guantánamo detainees to the United Arab Emirates, the single largest transfer of the entire Obama administration. If you'd like more background, I recommend an article in The New Yorker, published on August 1st. That article, by Connie Bruck, is titled, "Why Obama Has Failed To Close Guantánamo."

In Guantánamo, the United States government has incarcerated persons that the government says are "terrorists." However, the government has never revealed the basis upon which it has made these charges, and have never given those locked up the chance to be confronted by their accusers or to contradict what evidence, if any, the government may have against them. Moreover, it is well known that at least some of the prisoners in Guantánamo have been subjected to torture. Torture above and beyond the years-long indefinite imprisonment that is the basic condition of all those who are detained there.

A government that does this is not "defending freedom." It's doing the opposite.

If the people of the United States want freedom for themselves, and for their posterity, they must demand that the principles of freedom be applied in every case. Those who can walk in and out of "Camp America," under that sign, are operating in our name. It's unconscionable. It's intolerable. No imprisonment without a trial! That's a basic requirement of freedom.

Shame on the United States government! 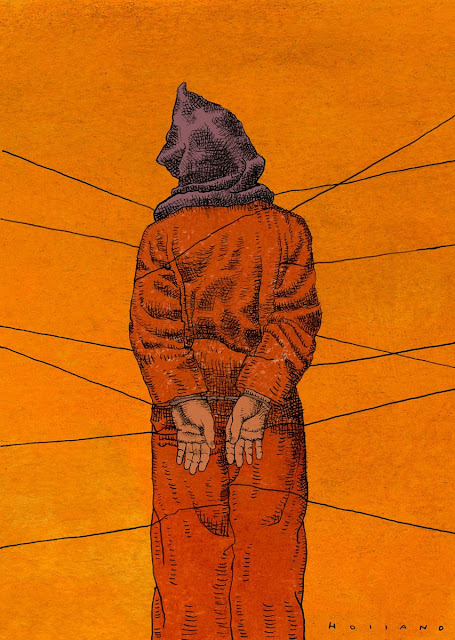