#268 / The Journal Of American Greatness 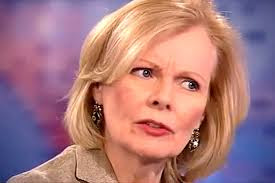 Poor Peggy Noonan (pictured). Hers is an unhappy lot.

Noonan was a primary speechwriter for President Ronald Reagan, and I think it is fair to say that while the nation has moved on, Noonan has not. Politics, post-Reagan, has never quite measured up for Peggy.

To give some examples, in 2015, as reported in Salon, Noonan "sneered" (Salon's word) that "Obama’s presidency means anyone can run for president now." Well, that is what they used to teach us in grade school. "Anyone" can be president in this land of opportunity. That is what I was told. But "anyone," for Noonan, doesn't include a black man named Obama. So far, no woman, either! It's pretty obvious that Obama actually believed the hype, and then he actually did get elected president. Noonan doesn't want that kind of mistake to happen again!

In the middle of August, this year, Noonan expressed her disgust for the current presidential candidates ("disgust" is my word), a disgust that extended to the candidates of both parties. To be fair to Noonan, that is an opinion that is shared by many. Noonan, though, is unabashedly outspoken:

It is like '"Oh my God," she said. "For the American people, what is their impression of the people who populate politics when they see stories like [Trump's] campaign manager being accused of being on the take. The Clinton Foundation stuff. It looks so bad, I'm very disturbed [about] the extent to which real-life modern politics is starting to look like something out of "Scandal" or "House of Cards." They're supposed to be wacked-out entertainments that have nothing to do with reality, which is how I like to think of them, but it is disturbing, these stories.

A third example of Noonan's disdain for the current state of our politics is found in her Wall Street Journal column published in the June 4-5, 2016 hard copy edition. This column bemoans the failure of the Republican Party to deal with the outrageous inadequacy and unsuitability of Donald Trump, a theme consistent with her general feelings about the current state of our politics, as outlined above. Clearly, whatever is happening now, politically, does not measure up to Ronald Reagan and that golden age gone by.

After bemoaning Candidate Trump in her column, however, Noonan does move on to some "good news." Listen to Peggy talk about The Journal of American Greatness:

A great party needs give. It needs a kind of capaciousness and broadness. On that, the best example of movement I’ve seen in some time is what I discovered this week: a sophisticated, rather brilliant and anonymous website that is using this Trumpian moment to break out of the enforced conservative orthodoxy of the past 15 years.

It is called the Journal of American Greatness. Its contributors ask questions that need asking and make critiques that sting.

They describe themselves as “aghast at the stupidity and corruption of American politics, particularly in the Republican Party, and above all in what passes for the ‘conservative’ intellectual movement.” Who are they? “None of your damned business.” Why? “Because the times are so corrupt that simply stating certain truths is enough to make one unemployable for life.”

Where they stand: “We support Trumpism, defined as secure borders, economic nationalism, interests-based foreign policy, and above all judging every government action through a single lens: does this help or harm Americans? For now, the principal vehicle of Trumpism is Trump.”

They explore essential questions. “When—and why—did free trade become a sacred ritual of the Republican right?” They give neoconservatism its intellectual due but explore the “unwisdom” of the “Middle East democracy agenda.” Neoconservatives seem “incapable of learning from their mistakes or changing their minds.” The contributors hilariously score NeverTrumpers who claim to be standing at great cost on principle while others are “in the tank” for Mr. Trump: “Of all the opinions that require little courage to express, opposition to Trump is the lead one.” In the past two decades, they observe, “a new conservative intellectual superstructure,” including magazines, journals and think tanks, was built on the new base of the Republican Party. It “routinized the production of its self-justification.” But “the base no longer wants the superstructure.” Voters have their own ideas of what conservatism is.

I contacted JAG by social media and asked about their work. “If we had to characterize ourselves, we would like to think that our writing is informed by a mix of pragmatic experience and theory. What brings us together is our dismay at the stultification of political ideas in the United States. We see ourselves as challenging the intellectual rigidity that has come to characterize, in our view, so much of what passes for self-described ‘serious thinking’ today.”

Their reach and the reactions they’ve received “have thus far significantly exceeded our expectations.”


Poor Peggy Noonan! Finally she found a group that reflects her own feelings about the "stultification of political ideas in the United States," and we find, in fact, that there actually isn't such a group and that there isn't any "Journal of American Greatness."

That's right! I checked out the group, too, just like Peggy did. Here's what I found:

Journal of American Greatness
Notice to Our Readers

The Journal of American Greatness began some months ago, to a large extent anyway, as an inside joke. At a certain point its audience expanded beyond any of our expectations. It also ceased to be a joke. Thus it no longer makes sense to continue it in its current form. No journal is meant to last forever, and this one won’t try to. We’ve decided to call it a day.

The inspiration for this journal was a profound discomfort with the mode of thought that has come to dominate political discourse—an ideological mode that makes nonsense of the reality of American life. The unanticipated recognition that we have received, however, also makes clear that many others similarly felt the desirability of breaking out of conservatism’s self-imposed intellectual stagnation. Should any such market for our ideas exist in the future, we may participate in it. But we will do so in a different way.

In closing, we simply want to thank our readers—we never expected so many of you—who made this extraordinary adventure possible over the last four months.

This is all kind of fun - inside baseball for the most intellectually pretentious members of the Republican establishment.