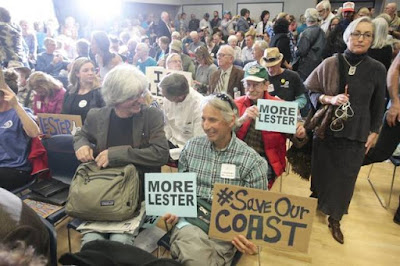 Back in February of this year, the California Coastal Commission voted to fire its Executive Director, Dr. Charles Lester. The picture above shows the crowd that came to the meeting. I think that about 1,000 people were there in person, to support Dr. Lester. As I recall, over 10,000 persons and organizations communicated with the Commission, opposing his termination. There was virtually no public testimony that Dr. Lester should be fired. Nonetheless, he was fired, and the Commission went into a secret session to take that action, too.

Yesterday, I received a bulletin from a Sierra Club activist. You can read it, below. The other shoe has dropped!

At the time of the firing of Lester many of us were concerned that the real reason behind his dismissal was the desire on the part of Commissioners to be able to control the staff and make their staff recommendations developer friendly. Unfortunately the document that is posted on the Commission's website as the outreach for candidates is written in a way that does just that. It calls for a change in the "culture" of the commission to one of "customer service." In other words, it considers the developers its customers and its mission is to serve them. It shows no concern for upholding the Coastal Act or the importance of the public. It also does not put into the requirements anything about maintaining an independent staff or an atmosphere that inspires staff and allows them to function. This is precisely what we were concerned about.

I strongly suggest that you go to the website. Go to the home page, www.coastal.ca.gov. Then, scroll down to "Now Accepting Public Comments on Executive Director Search Criteria."  Click on that link and then go to August 26, 2016 and click on "Draft Recruitment Materials: Memo."

Read the document and then send in your comments ASAP. When you do I suggest that you include your concerns, if you have them, about:

Please get your comments in quickly since they are working right now on a revised draft which will be out this Friday and discussed at the October hearing.

The idea that those persons who apply for development permits from public agencies should be considered to be "the customer" is a fundamental misunderstanding of the role of governmental agencies in the context of their responsibility for land use regulation. I have written about this before. Click this link if you'd like to see what I said in 2012, long before the controversy about Dr. Lester. The "customers" of a public agency are members of the public. Public agencies are supposed to do what the public wants, and to carry out the rules that have been enacted by the public. It is not the role of public agencies to do what the developers demand.

Feel free to weigh in on the proposed recruitment materials, as my Sierra Club friend suggests!