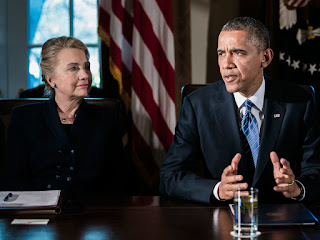 The photo above comes from an article in The New Yorker, dated September 23, 2015. The article, by Allyson Hobbs, was titled, "Why Aren't We Inspired By Hillary Clinton?"

In fact, millions of people (including millions of voters) ARE inspired by Hillary Clinton.

A letter published in "The Mail" section of the most recent edition of The New Yorker comments on this topic with respect to a different New Yorker article, not the Allyson Hobbs' article, but a commentary by Steve Coll.

Sharona Muir, of Perrysburg, Ohio (a "swing state, incidentally), complains about a "hold your nose and vote" tone of voice in commentaries about Clinton and her candidacy. Here is what she says about Clinton:

I completely agree that Muir is accurately reporting what millions think and feel. In my Day Three observations from the Democratic National Convention, I noted (even as a supporter of Bernie Sanders) that "any fair-minded person would have to say, after hearing that roll call vote, that Hillary did win the nominating process. Millions of voters heard their representatives express with great delight their support for Hillary Clinton."

Millions are inspired by Hillary Clinton for good reason. My advice (I've mentioned this before) is that Hillary spend the rest of her time inspiring the American people about what we can do, together, to make the changes we need to make, instead of advertising the very obvious deficiencies of her opponent.

Inspiring millions is what wins elections. The other person in that photo at the top of this blog posting is a very good example that this is true!