According to The New York Times, Hillary Clinton and Donald Trump differ on taxes. Click the link to read the article. Below, in a brief summary, is what The Times says about the candidates' differing plans on tax reform at the federal level:

Hillary Clinton envisions a 4 percent tax surcharge for income over $5 million, meaning that the very highest earners would effectively have a nearly 44 percent top marginal rate. She also envisions implementing a rule so that those with income over $1 million pay at least 30 percent, aimed at preventing high earners from paying low overall rates thanks to the lower capital gains tax. She would also limit the value of tax deductions, and require longer holding periods to get the low long-term capital gains tax rate, among other steps that would make the tax code less favorable to the affluent.

Donald Trump would cut the top marginal income tax rate to 33 percent. An analysis by the Tax Foundation of the House Republicans’ tax plan, on which Mr. Trump’s is based, found it would increase after-tax income for the richest 1 percent by 5.3 percent.

Mr. Trump also advocates lowering the tax rate on all business income to 15 percent — and has advocated that the rate apply to all sorts of businesses, including partnerships and sole proprietorships. That opens up room for people to find ways to turn what is now taxed as individual income into “pass-through” business income at that low 15 percent rate, especially those in position to hire tax lawyers to help them figure out the details.

For example, an executive who is paid $1 million in salary could instead form a limited liability corporation to “sell” $1 million of management services to his or her old company, cutting the tax rate to 15 percent.


In other words, the candidates differ in that Hillary Clinton would raise taxes on the wealthiest Americans. Donald Trump would lower taxes for them.

There are a couple of other differences, too, where taxes are concerned.

Clinton has made public her tax returns, and her joint return with Bill Clinton indicates that the Clintons paid federal income taxes of $3.24 million in 2015.

Trump has refused to make his tax returns available to the public, and this may well be, as New York Times columnist James B. Stewart says, because Donald Trump has quite likely paid ZERO income tax.

Stand by to find out why this shows that Donald Trump has truly "sacrificed" for the nation! 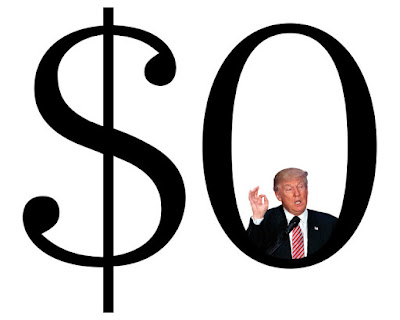