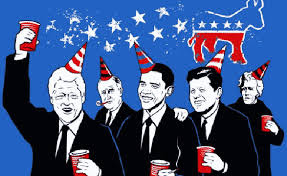 As long as this is its de facto mission, the DNC won’t ever be kindly disposed to a campaign financed by small donations—Bernie’s, or any others. Nor will it support campaign finance reform. Nor will it be an institutional voice for average working people and the poor. It won’t want to eliminate superdelegates or support open primaries because these reforms would make Democratic candidates vulnerable to non-corporate interests.

I have never been much of a "Party guy." My deep and long time personal involvement in politics has been almost totally at the local level, as a five times-elected Santa Cruz County Supervisor. In California, city and county local government offices are "non-partisan," which means that I never ran as a "Democrat."

Of course, I have always been a Democrat myself, and Democratic Party Clubs strongly supported me the five times I ran for local office. I also bet most of the votes I got were from persons who were registered Democrats. All that said, I never tried to get on the Democratic Central Committee for Santa Cruz County, or went to a State or National Democratic Party Convention.

Not until this year, that is! This year, I ran for election as a Delegate for Bernie Sanders, in California's 20th Congressional District, and was elected as an Alternate Delegate for Sanders. In that capacity, I attended the Democratic National Convention in Philadelphia, held at the end of last month.

I have reported on my experiences at the DNC's 2016 Convention in a number of postings to this Two Worlds blog. You can check out postings #206, #207, #208, #209, #210, and #211, if you would like to review my Convention reports. I can also recommend an excellent summary of the Convention by Jamie McGurk, published by TruthDig.

Based on what I saw in Philadelphia this year, Reich's description of the DNC is on target, and I think he poses an appropriate challenge in his article, one particularly directed, it seems to me, to those Sanders' Delegates who want to continue the "political revolution" that Bernie Sanders called for during his primary election campaign.

What is needed, says Reich, is profound structural reform, and he doesn't see this happening through some sort of internal reorganization. Reich says "we’re going to need a third party, or a third force, to pressure the Democratic Party to do what’s right by America."

Bernie Sanders is going to try to help, and has inaugurated an "Our Revolution" political organization, to "work with several progressive groups to train and vet candidates."

In other words, as I read between the lines, Bernie Sanders has suggested that those who want to achieve the kind of profound transformation of American politics that he called for in this year's presidential primaries, and that Reich is calling for in his article, had better decide that they are going to go to the party. They have got to get involved, and not stay home!