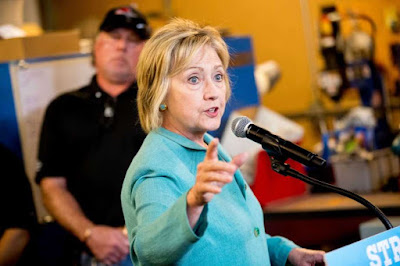 It is a political season, so I am reading the political commentaries in the newspapers that get delivered to my doorstep with even more interest than usual. On Friday, August 5th, John McFadden, a Presbyterian minister and a California-licensed marriage and family therapist, gave some political advice to Hillary Clinton. According to his headline, "Empathizing with right can give Clinton victory."

McFadden's advice came by way of a column in the San Francisco Chronicle, and because the Chronicle, like some other papers, hides its content behind a "paywall," a reader of this Two Worlds posting may not be able to click the above "headline" link and actually get anywhere. I'll quote a good part of what McFadden says, though, so that fact may not be much of a barrier. Here's what McFadden says:


What explains Donald Trump and his supporters? ... Begin with Donald. ... A clue is that Trump’s parents sent him away from home to a military school at age 13. Trump said, “In the second grade, I actually gave a teacher a black eye — I punched my music teacher because I didn’t think he knew anything about music and I almost got expelled.” Trump added, “I’m not proud of that, but it’s clear evidence that even early on I had a tendency to stand up and make my opinions known in a very forceful way. The difference now is that I use my brain instead of my fists.”

This outrageous behavior and his trivializing view of it — spinning a violent act into an expression of self-assertion — is one of many clues that Trump fits the mold of a sociopath-like person. This estimation is borne out by his well-known behavior during adulthood — in effect robbing lenders and contractors via bankruptcy, verbally trashing whoever opposes him, and proposing totalitarian measures. How can one possibly understand this kind of person, an antisocial type whose defining characteristic is that he just doesn’t care about anyone?

A clue that he is understandable is this remarkable statement: “I wound people to unwound myself.” He directly implies that his wild behavior is best explained by his vulnerability to hostility, not by his gross character flaws. This keyhole view into his psyche suggests an empathic explanation that includes grossly damaging treatment during childhood.

Likewise, his supporters may be best understood as fighting back against humiliating attacks. ...

Hillary Clinton and her supporters trash Trump for being a hater, more or less crazy, a small-time robber baron, and worse. In short, the left trashes the right for trashing people.

Here’s a related take on this irony: The left holds back from trashing poor people who, say, steal cars. The left is empathic toward badly behaved poor individuals, thinking of them as troubled people acting out the humiliation of poverty. But the left has no sense that Trump and his supporters also are acting out humiliation.

Nearly everyone on the left and on the right are steeped in the prevailing morality’s instruction to shame people who behave badly. The left’s intolerance of intolerance is one side of what seems a dangerous vicious cycle of hostility that pits nearly half of America against the other half.

McFadden may or may not be on target with his suggestion that "empathy with the right" will be a winning political strategy for Hillary Clinton. I personally doubt it, and note that while he gets very positive patient reviews on Yelp, McFadden's credentials do not seem to include any past campaign experience, or suggest that he has any better insight into the upcoming election than anyone else.

As someone who has had some on-the-ground political experience, allow me to state my opinion that there is a big difference between an election and family therapy, and in reading what McFadden says, I don't see how his observations actually tie to what might be a winning strategy for Hillary Clinton.

As I see it, McFadden is making a much more general observation: our world, and that includes our politics, would be much better if all involved were more empathetic and reacted to others with understanding, and without an effort to "shame" people for behaviors that we find to be anti-social or inappropriate.

That's to the good. I agree. The fact remains, however, that Donald Trump IS "a sociopath-like person," whose "well-known behavior" includes "robbing lenders and contractors via bankruptcy, verbally trashing whoever opposes him, and proposing totalitarian measures." Pointing out these actual facts about Trump is to make a good argument that the voters should vote for Hillary Clinton. It is unclear, at least to me, how expressing her "empathy" for this behavior would motivate voters in her direction. Generally speaking, voters are not really looking for a family therapist to occupy the White House.

Unlike sociopath Trump, Clinton has not launched unfounded personal attacks and suggested that Donald Trump should be in prison. She has pointed to what Trump says, and what he has done, and what he promises to do, and says that is disqualifying. Is that "trashing" her opponent? You can say so, if you want to, but to repeat myself, a political campaign is not family therapy.

Trump needs therapy, no doubt of that! And I think we should all have have empathy for his troubled personality.

But vote for the guy? NEVER!