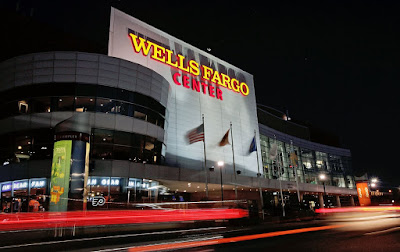 This year, the Democratic National Convention will be held in Philadelphia's Wells Fargo Center (pictured above). The Convention starts tomorrow, Monday, July 25th, and oddly enough, I am going to be there. I am a pledged delegate (an alternate) for Bernie Sanders!

Getting to be a delegate means you can get in the door to the Convention. Believe me, that's not an option open to everyone. I feel fortunate to be able to attend, and if you have been reading my recent postings to this Two Worlds blog, you'll know that my mind has definitely been focused on the upcoming presidential election.

It is, actually, somewhat "odd" that I am a delegate to this national convention, because I have never really been all that entranced with, or interested in, presidential politics, or "party" politics. My twenty-year career as an elected County Supervisor, in Santa Cruz County, California, gave me lots of political experience, but in California, local government officials are nonpartisan. So why on earth would I get involved in party politics, and national politics, now?

It's that "political revolution" thing!

As of today, the Convention has not yet voted. It is theoretically possible that Convention delegates could select Bernie Sanders to represent the Democratic Party in the November election. I truly believe that this would be the best thing for the Democratic Party to do, and would be the best thing for the country, and if, as an Alternate Delegate, I am called upon to cast a vote, I am planning to cast my vote for Bernie Sanders on that basis. Not to mention, of course, that I was selected to be here by Democratic Party voters in California's 20th Congressional District precisely because I pledged to do just that.

I know it's the longest of long shots that the Convention roll call is going to end up with a decision that designates Bernie Sanders as the Democratic Party's presidential nominee, but even if that doesn't happen, the kind of community-based, grassroots involvement that the Sanders' campaign has stimulated, all over the country - the kind of campaign that got me here - might just be able to achieve political "lift off," and begin a process that can lead to the kind of fundamental transformation of our politics that is so desperately needed.

I am going to be working on that, during this week in Philadelphia (and in what city better, when you think of it), hoping that our people can revive and reignite the democratic impetus that has done so much to allow the people of the United States (not without glaring exceptions, of course) to create and sustain a government that has been of, by, and for the people.