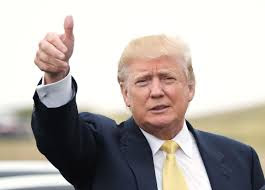 Joe Garofoli is a senior political writer for the San Francisco Chronicle. In a front page article that appeared in the Sunday, July 18, 2016 edition of that newspaper, Garofoli presented a five-item list of "What Trump Must Do" during the Republican National Convention.

Well, first thing, it's pretty clear that Trump doesn't really adhere to a "must do" type of approach to politics. Having said that, and the Convention now being over, how did Mr. Trump perform with respect to Garofoli's list?

Here is what Garofoli said Trump's political "to-do" list for the Convention had to include:
On Item #1, it looks like Mr. Trump didn't do very well. An organized NeverTrump group was shut down at the Convention, which isn't quite the same thing as "uniting the party." A Ballotpedia survey of Republican National Convention delegates found that nearly 30 percent of them have reservations about their presidential nominee. Among non-Trump delegates, half say they have doubts. And more than one in 10 of the delegates say that while they plan to support other GOP candidates in the fall campaign, they will not be backing Trump. Most telling, at least to me, was the headline on a front page article in the print version of the July 20, 2016 edition of The New York Times: "Speeches, So Far, Alienate Blacks in G.O.P." Uniting the party? Not so much!

On Item #2, "crazy" hit the Convention right out of the gate. Seeking to portray her candidate husband as more warm and personally appealing than he is generally given credit for, Melania Trump gave a speech that blatantly plagiarized a speech given by Michelle Obama in 2008. That plagiarism by Mrs. Trump, and the Trump campaign's full on denial and defense of this plagiarism, indicates to me a fundamental failure on the "don't say anything crazy" admonition. Washington Post columnist Dana Milbank obviously agrees, since his July 20th column was headlined, "The crazy face of Trump's GOP." I'm giving Trump a "fail" on Item #2.

On Item #3, I think it's fair to say that "policy" was not a major focus at the Republican National Convention. At least, there was very little public focus on policy, and there's a reason for that, too. As an opinion column in the Los Angeles Times noted, the actual policy content of the Republican Party Platform is a horrifying list of repressive and regressive proposals. Best not to highlight those, since not all voters would support the policies espoused by the right-wing, totalitarian-leaning, bigoted, racist, religious extremists who now control the Republican Party. I won't try to list the platform policies here. Check out The Times' column and read all about them for yourself. I think Trump rates an "F" grade on the "start talking about policy" item. His own speech, presented on Thursday, wasn't really big on policy, either. The candidate did not celebrate the policies contained in the party platform, nor did he talk about any other real "policies," either. Instead (surprise, surprise) Trump talked about Trump. In case you haven't caught on to this before, the Republican Party candidate has a very high opinion of his own greatness. Here is my choice for the most hyperbolic statement in the whole Trump oeuvre (emphasis added; grammatical error ignored):

Nobody knows the system better than me, which is why I alone can fix it.

On Item #4, that "make Paul Ryan comfortable" item, I'd have to say that Ryan looked pretty comfortable. Ryan spoke to the Convention on Tuesday night, and while pundits like Yahoo Senior Political Correspondent Jon Ward opined that Ryan was "less than happy to have declared Donald Trump the party’s nominee for president," Ryan's actual speech, which was well received by the delegates, contained this line: "Only with Donald Trump and Mike Pence do we have a chance at a better way!" That statement would seem to indicate that Ryan is on board with the "only Trump can do it" theme. I'm giving Trump at least a "B," and maybe even an "A" on this particular item in the Garofoli list. At this stage, Ryan seems pretty comfortable with the Trump candidacy.

On Item #5, one "former rival," Governor John Kasich, the Governor of the State of Ohio, the state in which the Convention was being held, was pictured outside the Convention Hall, but he refused even to come into the Hall. No hugs for John! Other former rivals in the primary elections, notably Jeb Bush and his entire Bush family clan, likewise failed to appear for the Convention. Former rival Ted Cruz, who got a prime speaking spot on Wednesday night, took the stage, but declined to endorse the nominee, and so Cruz was booed by delegates on the Convention floor. I'd mark Trump down as a failure on the "hug it out" test.

So, what's the "bottom line?" For me, while Trump got a lot of failing grades on the Garofoli test, there is an inherent fallacy in that Garofoli "must do" list. The fact is, the only thing that Donald Trump actually "must do" to be elected President is to get more electoral votes than the Democratic Party candidate.

I am hoping that the Democrats, as they get ready to go into their own Convention, won't get overconfident about their Party's chances, just because Trump scored so badly on Garofoli's "must do" list. With all due respect to Garofoli, Brabender's "Best Path" analysis, which I mentioned on Thursday, still seems to me to have a lot of relevance.

Here is the way Brabender sees it:

Mr. Trump ... has become the megaphone for a large group of voters who feel they have been disenfranchised from the political process, and abandoned on the economic battlefield... Mr. Trump also knows that “acting presidential” is equivalent to no longer being authentic and believable to his supporters. You’re never going to create an anti-Washington wave of the magnitude he needs if you sound too much like a focus-group-tested, teleprompter-guided candidate.

Paul Ryan, incidentally, whose speech I felt was quite successful, played on similar themes. Ryan was "comfortable" with Trump because Trump is going to be running as the "change" candidate. Trump is definitely not going to be someone who will try to campaign for a failing status quo. If what the electorate wants is someone who seems to speak for those who feel "disenfranchised from the political process," someone who is "authentic," then getting a good grade on the Garofoli test doesn't automatically count for much, in terms of how to put together those electoral votes, which is the only true "must do" requirement. In fact, high scores on Garofoli's "what good politics requires" test might actually give many voters a reason to vote against that candidate, instead of a reason to vote for that candidate.

Trump's failure to get a good score on the Garofoli test, in other words, may be seen, by many voters, as a pretty good argument in favor of his candidacy. To the degree that this is true, and Brabender is right about what the electorate wants in this election cycle, the Democrats would be wise to consider nominating a candidate who is also given credit for "authenticity," and who the voters think would fight for those "abandoned on the economic battlefield."

Other delegates, those coming to Philadelphia with the idea that they are going to be nominating Hilary Clinton, should be thinking about that option, too!