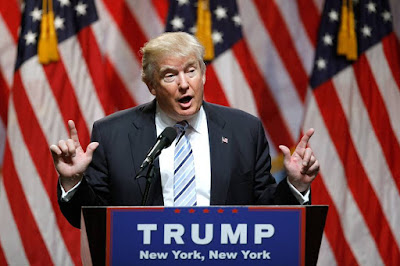 John Brabender, described by Wikipedia as a "prominent Republican political consultant," thinks that Donald Trump can win the presidency. He doesn't think that Trump can do that in the way that politicians have traditionally done it, though. If you're interested in Brabender's analysis, outlining "Trump's Best Path," you can click right here and read his July 19, 2016 column in The Wall Street Journal.

As the Republican Party Convention in Cleveland winds down, and as the Democrats get ready to meet in Philadelphia for their Convention, it might be worthwhile to pay attention to something beyond the narcissism that the Trump pageant has so tellingly displayed. Can a DSM-qualified narcissist become our next President? Here is the essence of the Brabender argument:

There has been much criticism of Mr. Trump as a messenger. But what he seems to understand remarkably well is that he has become the megaphone for a large group of voters who feel they have been disenfranchised from the political process, and abandoned on the economic battlefield by both parties. Mr. Trump also knows that “acting presidential” is equivalent to no longer being authentic and believable to his supporters. You’re never going to create an anti-Washington wave of the magnitude he needs if you sound too much like a focus-group-tested, teleprompter-guided candidate.

I believe that Brabender is absolutely right in saying that there is "a large group of voters who feel they have been disenfranchised from the political process, and [that they have been] abandoned on the economic battlefield." In fact, I will be in Philadelphia next week to represent many such voters, who selected me to be a Bernie Sanders' delegate to the Democratic National Convention.

A Democratic Party candidate who thinks politics as usual will win, and that the obvious deficiencies of Mr. Trump will repel voters, is making a bet that will put the future of our nation in peril!