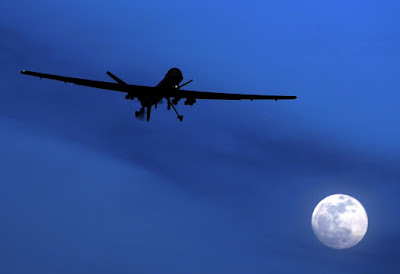 The Washington Post news story from which this very pretty picture was taken recites drone casualty figures that seem pretty small to me. They paint kind of a "pretty picture," too:


The United States has inadvertently killed between 64 and 116 noncombatant civilians in drone and other lethal attacks against terrorism suspects in places not considered active war zones, the Obama administration said Friday [July 1, 2016].

The unintentional deaths came in a total of 473 CIA and military counterterrorism strikes up to the end of 2015 that the administration said have taken between 2,372 and 2,581 militants permanently off the battlefield in countries where the United States is not at war, which would include Pakistan, Yemen, Somalia and Libya.

In fairness, the story does point out that non-governmental sources put the death counts much higher. Death counts aside, however, what The Washington Post story does not address is how those communities and persons subjected to drone warfare react. In an article titled, "Grim Reapers," printed in the November 11, 2014 edition of The Nation, Jenna Krajeski gave us some insight. This poem is by an unnamed Afghan woman:


May God destroy your tank and your drone,
you who’ve destroyed my village, my home.

"The poem is a landay, folk poetry sung among Pashtun women along the border of Pakistan and Afghanistan. Traditionally, the twenty-two-syllable poems were performed over drumbeats at weddings and other gatherings, but decades of violence, and the Taliban’s oppressive rule, have made such performances rare. Today, landays are still collected and shared, but more privately."

My Nabi was shot down by a drone.
May God destroy your sons, America, you murdered my own.

Drone killings cannot be made "pretty,"with either pictures or statistics. The headline on an opinion piece by James Downie, the Post's Opinions Editor, gets it just right:

Obama's drone war is a shameful part of his legacy.