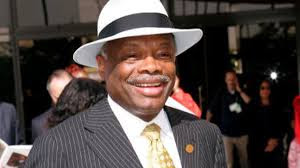 Willie Brown, former Speaker of the California Assembly, and former Mayor of San Francisco, is currently a columnist for the San Francisco Chronicle. Brown's column in yesterday's Chronicle (my link is probably not functional for any but Chronicle subscribers, I'm sorry to say) suggests that Donald Trump's vice presidential pick was a pretty smart choice. By picking Indiana Governor Mike Pence as his running mate, Brown says, Trump excused himself from having to "pander to the right."

While I agree with Brown in this observation, another comment in Brown's column grabbed my attention even more, and deserves a response. Speaking of the Black Lives Matter movement, Brown says that it faces "one big challenge: the absence of leaders." Brown suggests that the Black Lives Matter movement needs someone like "Jesse Jackson or Al Sharpton commanding the airwaves or the agenda."

Let me suggest that this remark rather reeks of sexism (not to mention ageism). In fact, the Black Lives Matter movement was founded by three young women: Patrisse Cullors, Opal Tometi, and Alicia Garza. Its self-proclaimed mission is "to build connections between Black people and our allies to fight anti-Black racism, to spark dialogue among Black people, and to facilitate the types of connections necessary to encourage social action and engagement."

Young Black women can be "leaders," too. The ability to lead movements for social justice for Black people is not restricted to old Black men.