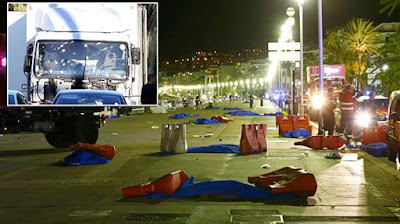 The horrific terrorist attack that took place on July 14th in Nice, France, was carried out by single individual, who converted a common truck into a weapon of mass death.

What are we going to do about that?

When a shoe bomb terrorist tried to blow up a plane with a bomb built into his shoes, we changed the rules at airports, so we all have to take off our shoes, and have them scanned, before we get onto the plane. By the way, the airplane flight on which the shoe bomber traveled took off in Paris, France, and was headed for Miami. Looks like there's a French connection!

But what about the truck connection? Big white trucks go everywhere! 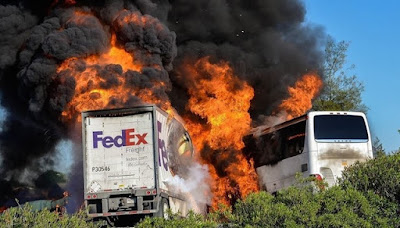 Bruce Bawer, writing in City Journal, suggests that we should focus not on the "means" used by terrorists to deal out death, and to kill people, and to make us all afraid. Bawer thinks we need stop fooling ourselves:

The time for shock is over. The time for heaping up flowers and candles and stuffed animals at the sites of atrocities is over. The lies and ignorance and cravenness must end, and the simple facts must be faced. The free, civilized West has, for years now, been the target of a war of conquest—a war waged in many forms (of which terrorism is only one) by Islamist adherents preaching submission, intolerance, and brutality, and our leaders and media, with few exceptions, continue to play a game whose fatuity, fecklessness, and pusillanimity have become increasingly clear. After Nice, no more.

We should, according to Bawer, admit that we are (not our fault, of course) engaged in a religious war against Islam. Even if this were true (Bawer and Bill Maher seem to have the same idea), shoes, trucks, and those who have a religious commitment to Islam, are in large supply, almost everywhere.

Donald Trump, it sounds like, will pick up the Bawer banner, and try to carry it to the White House.

I'd like to suggest that Americans not buy into the Bawer/Maher/Trump idea that what we need to do now is to proclaim and advance a religious war!

Disentangling ourselves from the religious wars in which we are currently engaged would be a good first step to preventing further hostilities.

And if you don't think that the United States government is delivering death, destruction, and terror itself, in a religious war that the United States is advancing, with the terror we deliver being delivered in a quantity vastly in excess of what some one person can do with a big white truck, or a shoe, check out the pictures below: 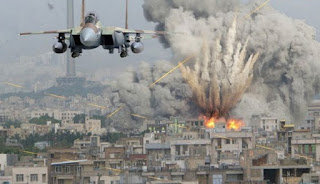 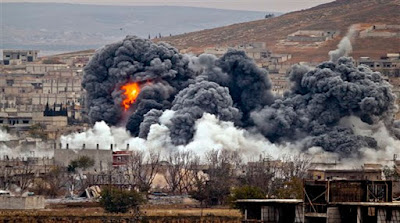