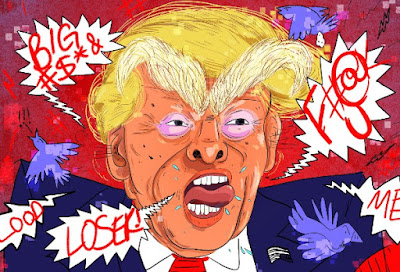 This image, like Donald Trump himself, is hard to ignore. I found it on a blog posting by David Weinberger, who writes, mainly, about the effect of tech on our ideas.

In his blog posting entitled, "How Donald Trump Hijacked the Authenticity of the Web," Weinberger claims that Trump appears to be "authentic," even "honest," because political discourse has succumbed to a standard of "political correctness" that makes virtually all political speech seem somewhat deceptive and fraudulent.

In other words, by saying the politically incorrect thing, Trump gets credit for "speaking truth to power," and for an honesty and straightforwardness to which he is most emphatically not entitled.

Weinberger's observation is worth thinking about, particularly as those who hope for an honest political discourse think about how to "trump" the advantage that "The Donald" has managed to obtain by his ruthless and brutal disregard for good breeding and the truth.