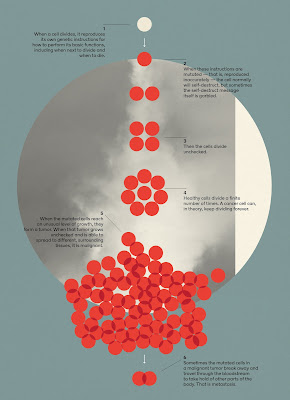 The New York Times Magazine for May 15, 2016 is devoted to an exploration of "The New Anatomy of Cancer." I recommend it. Two statements particularly caught my attention:

Learning From The Lazarus Effect

Cancer is a monster, but in its fierce evolutionary tendencies, it is grasping, as with anything else in nature, for a way to be in the world. Life on earth has invaded the air, the deep sea, the bedrock. Over eons, it has suffered meteor storms, volcanic dystopias, shifting continents and deprivations beyond counting, and yet it always comes back stronger. With cancer, biology’s fierce insistence — its resilience, its ceaseless creativity, its sheer generative capacity — is the enemy. With cancer, the opponent is life.

If we can use cancer as a metaphor, the lesson is that life is a circle, not an unending extrapolation. When we refuse to recognize and respect limits (and the ultimate limit to our individual lives, death), the result is destructive to life itself.