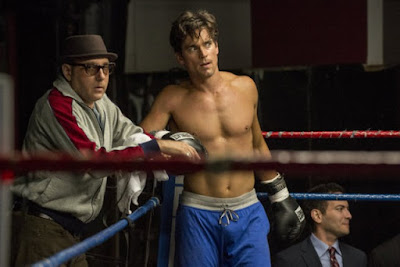 Take one's gloves off
Fig. to stop being calm or civil and show an intention of winning a dispute by any means. (As if boxers were to remove their gloves in order to inflict more damage).

David Petraeus is a former General in the United States Army who resigned his position in 2012, at about the same time he pled guilty to the mishandling of classified information. Petraeus had provided a significant amount of classified information to his lover, who was writing a book, thus demonstrating the General's ability to break vows in two categories, simultaneously.

At one point, in 2007, before the General's conviction and resignation, which might have made the sobriquet more defensible, the MoveOn organization published a full-page ad in The New York Times that called Petraeus "General Betray Us." That characterization caused great consternation, and in 2010, MoveOn removed all mention of the "General Betray Us" title from its website. Presumably, this decision by MoveOn was stimulated by the fact that President Obama had nominated the General to be the new top U.S. and NATO commander in Afghanistan.

On May 21, 2016, The Wall Street Journal provided former General Petraeus and co-author Michael O'Hanlon with an opportunity to sound off on The Journal's "Opinion" page. Their opinion piece was titled, "Take the Gloves Off Against the Taliban." In it, the General and O'Hanlon, who is a Senior Fellow at the Brookings Institution, advocated increased bombing in Afghanistan, bemoaning the fact that under President Obama's decision to "minimize U.S. involvement in the war," NATO aircraft dropped "only about 1,000 bombs in Afghanistan in 2015...a fivefold reduction from the war's peak level of activity." Petraeus and O'Hanlon contrasted this meagre commitment to destruction with what the United States has been doing in Iraq and Syria, where "we dropped almost 30,000 [bombs] in 2015."

My observation is that "bombing" people does not achieve anything positive, or at least not very much that is positive. Iraq is falling apart, and Syria already has fallen apart, flooding Europe with refugees who have no other place to go, in view of the destruction that bombing has wreaked upon their cities (see below).

Apparently, the General wants us to "take the gloves off...." and then punch ourselves in the face. Not to mention what we would be doing to those upon whom our bombs would fall.

How about, instead, that we just thank our lucky stars that Petraeus was forced to resign? 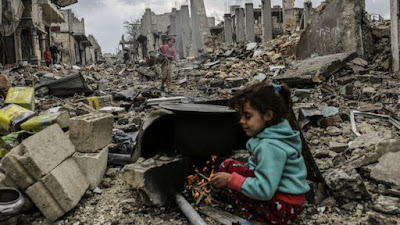