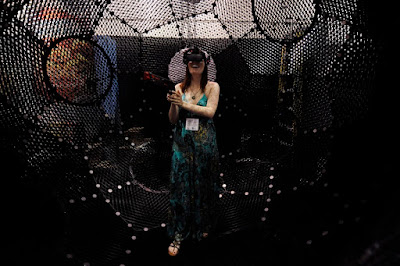 The Atlantic ran a nice story on April 20, 2016, "Virtual Reality Reminds Users What It's Like to Be Themselves."

According to Michael W. Clune, who is a professor of English at Case Western Reserve University, and the author of Gamelife, this is actually what "VR," or Virtual Reality, ought to be attempting to accomplish.

Taking to technology to discover one's true self is apparently a technique that Clune has been perfecting from a very early age. Clune's publisher, Macmillan, tells us that Gamelife is "a memoir of a childhood transformed by technology."

Clune spent afternoons gazing at pixelated maps and mazes, "training his eyes to understand the uncanny side of 1980s suburban Illinois." A game about pirates yielded Clune clues to the drama of cafeteria politics and locker-room hazing. And in the year of his parents' divorce, a spaceflight simulator opened up a hole in reality. "In telling the story of his youth through seven computer games, Michael W. Clune captures the part of childhood we live alone."

In his article in The Atlantic, Clune tells us that when he has thought about Virtual Reality, he has typically thought about "films and games, imaginary worlds made real." However, something happened at the Cleveland International Film Festival that made Clune change his mind. As he was taking off his headset after watching a VR film, a self-described Virtual-Reality "freak" told him, "You gotta check this out.” A local video company was showcasing its wares, and they had created a Virtual Reality version of their studio. Here is Clune's report:

I strapped on the headset, wondering why I’d want to see a local video company’s studio. Suddenly, I was in a brightly colored room containing several desks and a video camera. There were some lenses on the desk before me. I turned my head and more of the room scrolled into view. I turned my head back to the desk. I picked up a lens with my hands and held it before my face. A tingling started at the base of my spine.

What’s going on? I thought. I’ve done all this before in VR. Why is this affecting me now?

What astonished me was that I wasn’t just looking. The technology tied my vision to my body—to the motion of my neck and shoulders. My embodied vision twisted and turned through the space like a snake. The feeling of leaning in towards the desk, seeing the desk move towards me, blew me away. The fine details of its wooden surface magnified as I looked closer. I couldn’t believe it. I turn my head and I can see the side of the room? Unreal, I thought. Plus I have hands!

For some time the technician had been gently asking me if I’d seen enough. Now he asked a little less gently.

“That was the most beautiful room I’ve ever seen,” I said quietly, taking off the headset. Forget about the wonder of seeing the world through someone else’s eyes. Why haven’t I realized before how amazing it is to see the world through my eyes?

Being in that virtual studio, moving my head and watching the view change. Leaning in towards the desk and seeing small images get larger. Magic. But when I took off the headset the magic didn’t stop. It got stronger. I could still move my head and watch the view change. And now there were many more rooms to explore. Hundreds of cars to look at, thousands of buildings to examine. Millions of drops of rain scintillating in incredible realistic detail on an infinite number of surfaces. I’d accidentally discovered the true function of VR.

It must have felt like this when I first learned how to walk, I thought, as I drove home. Or even earlier, the first time I raised my infant head from the crib and unpeeled a few more inches of the world.

Right now, I thought. I am experiencing what it’s like to have a body right now. I turned my head. I moved my hands on the steering wheel. At present, the highest praise that journalists can lavish on a VR system is to say, as Kevin Kelly does in his Wired piece, that “the transition back to the real world … was effortless.”

To me, this misses the true magic of the technology. VR restored the simple wonder of moving around the world in a body.

Think about that for a moment. It doesn't take any technology, any human technique, to be able to experience the wonder of "moving around the world in a body."

To be able to do that is, indeed, a wonder. It is, in fact, the gift of life.

We don't create that. We don't have to. We get that for free!