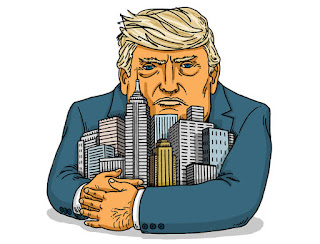 The fact that Donald J. Trump is running for President means that there is a lot of attention being paid to Trump's views on economics. Yesterday, I mentioned a March 28th article from The New York Times that tried to educate the public about the deficiencies in Mr. Trump's understanding of international trade.

Today, let me mention an article from the March 20th edition of The New York Times Magazine. This article, by Adam Davidson, is titled, "What Donald Trump Doesn’t Understand About ‘The Deal.’"

Davidson was a co-founder of NPR's Planet Money, and he does have some serious economic cred. Where Trump goes wrong, according to Davidson, is in thinking that economics is a "zero sum" game. Trump does seem to think that this is how the world works. For Trump, a "deal" means that one person wins and the other person loses, but when that happens, says Davidson, it turns out that "the deal" is not a very good deal for either one of them. The flaw in Trump's economic understanding is basic; however, Davidson has an explanation for how Trump got so far off the beam.

Describing the economic practice of "rent seeking," Davidson notes that the kind of "rentier economics" that are at the foundation of Trump's economic worldview is perfectly consistent with how the market actually operates in Manhattan, where Trump's father was a real estate mogul, and where Trump is, too:

In a rentier state, every ambitious person knows that the way to become rich and powerful is to grab the sources of wealth and hold onto them, by force if necessary. It’s no accident that, around the world, rentier states tend to be run by unelected dictators — the ultimate dealmakers in chief.

The concept of the "zero sum" game, where wealth and value are fixed, and where you "win" when you grab more than anyone else, fails to take account of one of the cardinal realities of human life:

We are all in this together!

Another presidential candidate, mentioned much less frequently in the mainstream media than Mr. Trump, gets it just right in the little video clip featured below.