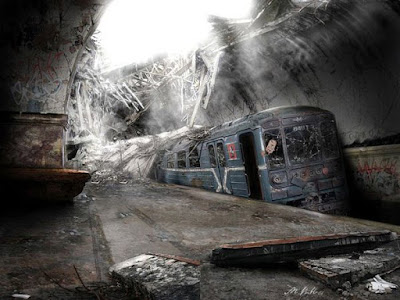 As the tides bring their tributes to the beach, so does the Internet deposit strange thoughts on the shores of my consciousness.

Take that picture above, for instance, which accompanied an article claiming that "one of the world’s leading scientists, Professor Frank Fenner, has made a grim prediction: He says that humans will be completely WIPED OUT in 100 years, as overpopulation and environmental destruction will cause humans to become extinct in a matter of years."

You can read the article for yourself by clicking this link.

While there is much truth in what the article says, and while I think we should pay heed to the warning it conveys, I have decided to pick Faulkner over Fenner.

I say, with Faulkner:

I decline to accept the end of man. It is easy enough to say that man is immortal simply because he will endure: that when the last ding dong of doom has clanged and faded from the last worthless rock hanging tideless in the last red and dying evening, that even then there will still be one more sound: that of his puny inexhaustible voice, still talking.

I refuse to accept this. I believe that man will not merely endure: he will prevail. He is immortal, not because he alone among creatures has an inexhaustible voice, but because he has a soul, a spirit capable of compassion and sacrifice and endurance.

The poet’s, the writer’s, duty is to write about these things. It is his privilege to help man endure by lifting his heart, by reminding him of the courage and honor and hope and pride and compassion and pity and sacrifice which have been the glory of his past. The poet’s voice need not merely be the record of man, it can be one of the props, the pillars to help him endure and prevail.

This quote, from Faulkner's Nobel Prize Acceptance Speech, is pinned inside my closet, as it was pinned inside the closet of my father. I got that quote from him. It is a prized possession.  It is in this spirit, each day, that I write to whoever might read this Two Worlds blog.