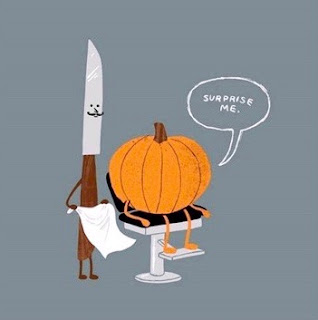 Mostly, we know what's coming; or, at least we think we do. Sometimes, however, we are genuinely surprised. Something happens that we didn't expect. Sometimes, we even surprise ourselves.

We relate to the world as both observers and as actors. Being a good "observer" is of great importance, but in the world in which we most immediately live, a world we actually create ourselves, by our own actions, watching something "happen to us" is somewhat problematic, if we have any preference about what the world should be like.

The historical processes that we have set in motion by our actions in the past have momentum; they have inertial force, and the force of the past pushes always ahead, on a course that can be charted and predicted. There aren't going to be any real surprises about the future effects of past actions.

We pretty much know where we're headed, don't we?

Hell in a hand basket is what my grandfather would have said.

Let's surprise ourselves, is what I'd answer.