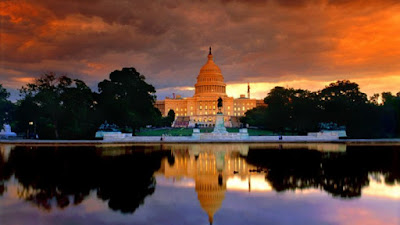 The Nation of Change website posted an article on March 13, 2016 with the following headline: "Igniting, Harnessing the Massive Power of the People." The article itself, written by Michael Payne, doesn't quite live up to the headlined promise, and in fact, the article actually starts out from a kind of downbeat position:

Sanders and Trump are both traveling down similar paths to bring long overdue changes to this government. They both know that the embedded political Establishment that governs both the Republican and Democratic parties stands in the way of facilitating this process..... No matter what Sanders and Trump want to do, no matter how many of these revolutionary initiatives they want to put into effect, the members of that Establishment will fight them tooth and nail and it will be very difficult, if not impossible, to carry out their agenda.

Real change? Definitely desirable, but in Payne's judgment: "Difficult, if not impossible!"

Payne's article does go on from this initially pessimistic beginning. Perhaps the body of the article is Payne's effort to justify the headline, which may well have been written first, thus providing an aspirational objective at which Payne might aim his analysis.

How do we make the "long overdue changes" we need to make? How do we carry out the "revolutionary initiatives" that Payne is hoping for? How do we, in fact, harness the "massive power of the people?"

Let me give you Payne's prescription:


Here is what Sanders, together with the Democratic Party, must do. A strong, continuing message must be sent to the American electorate that it’s time for them to rise up, stop sitting on the sidelines and become directly involved in electing the next president. Americans need to stop listening and watching the many mind-conditioning political commercials and think for themselves. They need to think deeply about the issues and assess the individual candidates’ positions on them.

They need to watch the debates of both parties; listen closely to what the participants say; tune out the bluster and boring repetition and see which candidate seems to have the best grasp of this country’s many pressing problems; see which candidate offers up substantive solutions. Get a feel for that candidate who seems to have a vision for the future and the direction into which this country should head.

And most important of all, to keep this movement’s momentum going, the American people must go to the polls in massive, record-setting numbers, exercise the power that they possess, and begin to lay the groundwork needed to change this broken, corrupted political system. No Super Pac, the Koch brothers or the Wall Street bankers can withstand the power of the people when it is fully unleashed.

This is a helpful admonition, and "Igniting, Harnessing the Massive Power of the People" is a very good headline (at least I think so). But we need to understand this headline correctly, as we attempt to understand our current situation, and the options now available.

It does happen, from time to time, that a government that has harnessed our individual power to create a new and massive collective power no longer reflects the will of "the people," and no longer works to accomplish what a majority of the people need and want. Americans, specifically, have an historical reference, and we know what to do when such a situation arises:


We hold these truths to be self-evident, that all men are created equal, that they are endowed by their Creator with certain unalienable Rights, that among these are Life, Liberty and the pursuit of Happiness.--That to secure these rights, Governments are instituted among Men, deriving their just powers from the consent of the governed, --That whenever any Form of Government becomes destructive of these ends, it is the Right of the People to alter or to abolish it, and to institute new Government, laying its foundation on such principles and organizing its powers in such form, as to them shall seem most likely to effect their Safety and Happiness.

In a speech to the United States Senate, talking about the capture of our collective power by a few corporations, and by a few of the wealthiest individuals in our country, United States Senator Elizabeth Warren has told us that we may be pushing the point at which our government will have become "destructive," no longer serving to advance the rights of the people at large. At such a point, Warren says, the government to which we have given our allegiance must be seen as "broken," and at that point must be either repaired or replaced - "altered" or "abolished," to use the phrase employed in the Declaration of Independence.

I do think that our participation in the electoral process is important, as Payne urges. However, as I read his statement, he makes it sound like these are tasks we are to undertake individually. I think not!

The individual powers that we each possess, on an individual basis, have, literally, been "harnessed." They have been put under the control of those who run the government. Our option is always to decide to whom we want to cede our individual power. If what we have called "our" government is no longer truly "ours," and is no longer worthy to receive the powers we have delegated to it, we must reassign those powers to other organizations, organizations that we must create ourselves, and to which we will dedicate our lives, our fortunes, and our sacred honor.

There isn't any other way to do it, when the government is truly broken. It's that "political revolution" you've been hearing about!