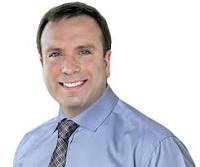 Dana Milbank, pictured above, is a columnist for The Washington Post. His mission among columnists, as the Post puts it, is to provide "an irreverent take on Washington's political theater. Three times per week." Just to be sure you understand the general drift of Milbank's "take" on politics, which tends to be establishment-oriented, you should be aware that while Milbank professes to "adore" Bernie Sanders, he thinks (or thought, as of January 26, 2016) that "Democrats would be insane to nominate Bernie Sanders."

Let's shift forward from last January to this past week. In his column reprinted in the San Jose Mercury News on Sunday, March 13th, Milbank made fun of Hillary Clinton's campaign manager, Robby Mook, for answering every recent press inquiry about the Clinton campaign, including questions about why she so unexpectedly lost to Sanders in Michigan, with a statement that Hillary has a plan to "create more good-paying jobs." That's the Clinton mantra.

Milbank was also critical of the Clinton campaign's continued stress on the mathematical inevitability of a Clinton nomination. The title of the March 13th column was, "Clinton’s shaky campaign has the math, but lacks the message."

Politics, ultimately, is about choice. It is about candidates competing for votes, with each candidate urging the voters, or prospective voters to be more accurate, to choose him or her over his or her competitors.

A message that says there really isn't any choice is the antithesis of good politics. That's not a very appealing message. For one thing, that message is attempting to swim upstream against the truth. The truth is, until it has happened, nothing is inevitable.

If Milbank is critical, now, of a Clinton campaign "message" that is all about rote slogans and statements about the mathematical certainty of Hillary's nomination, he should be willing to acknowledge part of the blame. Telling the voters in January that they would be "insane" to make a choice for Sanders, indicating that nominating Sanders would not really be a "choice" at all, gives us the current campaign pitch of Robby Mook.

Hey folks, we always have a choice!