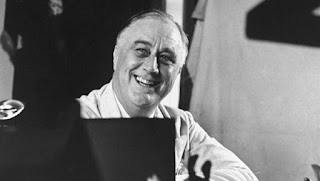 David Brooks, the almost always full of himself columnist for The New York Times, pontificated to the four winds on Tuesday, February 16th, addressing his column on that day to "Dear Hillary, Jeb, Marco, and John."

For those not closely following the politics of the various Presidential campaigns, the candidates Brooks chose to address in his column were Hillary Clinton, Jeb Bush, Marco Rubio, and John Kasich.

Brooks apparently deemed it unnecessary to address any advice to Donald Trump or to Bernie Sanders, both of whose candidacies he deems "wildly impractical."

In fact, Brooks' observation is that the Trump and Sanders candidacies are not only "wildly impractical;" they are also campaigns that generate "passionate intensity." He really hates that!

Brooks wants to help out those candidates he specifically addresses, giving them pointers on how to defuse that "passionate intensity" thing. Full of himself as he is, Brooks apparently has no hesitation whatsoever in thinking that he knows just the right way to help out those "worthy" candidates that he deems better than the wildly impractical ones.

What is Brooks' advice? Well, essentially, Brooks believes that Hillary, Jeb, Marco, and John should all try to channel Franklin Delano Roosevelt.

That may be a great idea, though none of the candidates to whom Brooks is giving this advice seem to have the potential or the capacity to emulate Roosevelt in any significant way. If you are acquainted with Roosevelt's tenure, you will remember that he tended to evoke passionate intensity, from both supporters and opponents, and though it may have surprised everyone (who probably would have deemed it wildly impractical), Roosevelt shepherded through fundamental changes in government, politics, and the economy, in what any fair observer would call a "political revolution."

Wait a minute!! That's what Bernie Sanders is calling for. Could it be that Brooks has picked the wrong candidates to try to channel Roosevelt?

I suspect that's true. Take, for instance, this actual quotation:

We had to struggle with the old enemies of peace—business and financial monopoly, speculation, reckless banking, class antagonism, sectionalism, war profiteering. They had begun to consider the Government of the United States as a mere appendage to their own affairs. We know now that Government by organized money is just as dangerous as Government by organized mob. Never before in all our history have these forces been so united against one candidate as they stand today. They are unanimous in their hate for me—and I welcome their hatred.

But I bet you could see Bernie Sanders saying just the same thing. In fact, he pretty much has!

Hillary, Jeb, Marco, and John don't really have that same spirit. You just don't hear them saying anything like, "I am fighting against the wealthy special interests, and I don't care what they think!" You'd have to go with Bernie Sanders if you really want to find a candidate who takes "The Roosevelt Approach," which was the title of Brooks' column.

In terms of governing, the "Roosevelt Approach" was the opposite of what Brooks counsels. He says that Sanders is "uninhibited by the constraints of reality." By this he means that Sanders refuses to concede that the way things are today is the way they have to be.

And Franklin Roosevelt didn't accept that either. He was famously willing to experiment with change, to create a new reality.

He did that, too.

And any fair minded observer would say that this was a "political revolution."

We know it can be done!