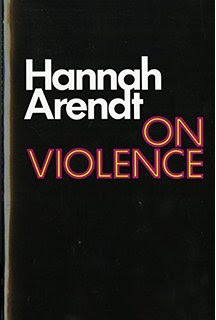 The Hannah Arendt Center for Politics and the Humanities at Bard College is sponsoring a "virtual reading group," which meets by way of a monthly video conference. Currently, the group is devoting three sessions to the study of Arendt's 1969 book, On Violence.

Incidentally, if you are tempted (as I clearly was) by the idea of being able to take part in a book group devoted to the works of the person who may well be the 20th Century's most important political philosopher, you should know that members of the Hannah Arendt Center participate free. You can join the Hannah Arendt Center by clicking the link, and making a (tax deductible) contribution.

At the last session, discussion touched on the legitimacy (and efficacy) of war, and Roger Berkowitz, the Academic Director of the Center, who led the discussion, said that Arendt distinguished between wars aimed at achieving some concrete result in the real world and war waged purely for "public relations" purposes, as for instance to demonstrate to the world that a nation participating in or waging the war should be taken seriously, and that such a nation has a legitimate right to claim world leadership.

The Vietnam War was, in fact, just such a war.

There is a real question how much public relations value is actually realized, either. As a way to get good public relations for the United States, war didn't work out so well in the case of the Vietnam conflict; at least, that's my observation!