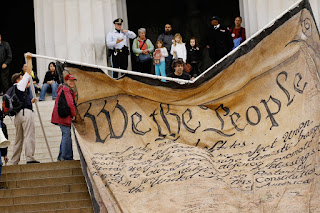 The Sleeping Sovereign is the title of a book by Richard Tuck, the Frank G. Thomson Professor of Government at Harvard University. Click the title to get some more information on Tuck's book.

You can click right here to review some comments on the "Sleeping Sovereign" topic by Roger Berkowitz, the Academic Director of the Hannah Arendt Center for Politics and Humanities at Bard College. His comments are titled "Waking The Sleeping Sovereign." I think they are very much worth reading.

Berkowitz' comments were stimulated less by Tuck's book directly than by an article in the New Republic that commented on what Tuck has to say. The New Republic article referenced by Berkowitz is titled, "What Is The Constitution For?" That article is well worth reading, too. Here's a quote from the article that grabbed my attention:


[Tuck] treats the Constitution in terms of democratic political theory, rather than judicial interpretation. This shifts the emphasis. The point of the constitution is indeed in its origins, but the point is not what it “meant” originally, but where its authority originates: in the citizenry acting as sovereign lawmaker.