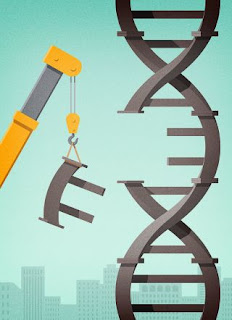 Using this technique, "scientists can change, delete, and replace genes in any animal, including us.

"Working mostly with mice, researchers have already deployed the tool to correct the genetic errors responsible for sickle-cell anemia, muscular dystrophy, and the fundamental defect associated with cystic fibrosis.

"One group has replaced a mutation that causes cataracts; another has destroyed receptors that H.I.V. uses to infiltrate our immune system."

There is a potential problem with this new technology (at least some people think it's a problem): the changes that CRISPR technology permits can be applied in a way that will affect not only individuals, but all future offspring. In other words, it is now possible for human beings to modify the genetic codes that will, ultimately, establish what a species is, and to create a new species, that will be different going forward as normal reproduction takes place.

If this sounds like science fiction, it's not. It's science "fact," and it's not difficult, either. As Specter writes, "Ordering the genetic parts required to tailor DNA isn’t as easy as buying a pair of shoes from Zappos, but it seems to be headed in that direction."

The Specter article prompted the following letter, published in "The Mail" section of the December 14, 2015 edition of The New Yorker:

Specter highlights exciting developments in the field of gene editing, but he is too quick to dismiss the shadow side. Writing that CRISPR “offers a new outlet for the inchoate fear of tinkering with the fundamentals of life” is an inadequate characterization of the risks involved. The piece describes a nightmare of Jennifer Doudna’s, in which she tutors Hitler about editing genes, but does not reference Eric Lander’s sober warning, in an article on heritable genome manipulation, in the New England Journal of Medicine.

Specter does not mention that dozens of countries, including most with developed biotech sectors, have written prohibitions on heritable genetic manipulation into their laws, and into a binding international treaty. In distinguishing the public—and its advocates—from scientists, Specter might lead readers to erroneously believe that researchers are not deeply concerned. Nearly all scientists want a broad public debate about what kind of gene editing should be pursued. This is a potentially society-altering technology, and democratic engagement with its trajectory is crucial and pressing.

It does seem to me that when a health care treatment might well affect the entire human race, going forward, decisions about that treatment should not, properly, be strictly between a doctor and an individual patient. "Democratic engagement" on issues like these strikes me as very much appropriate.