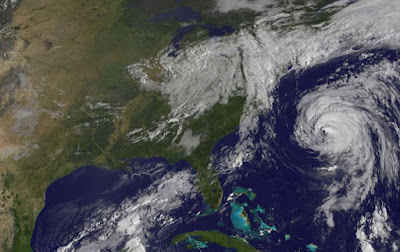 .Mic has an "About" section on its website, which informs interested persons that .Mic was founded as "a news company for young people." I am sure that must be true, but we older types can also get access! As an example, I recently saw a story from News.Mic with the following headline: "NASA Study Concludes When Civilization Will End And It's Not Looking Good for Us."

This topic (when will civilization collapse?) is a topic I think about often, and in my view, young and old alike should care about the possibility that civilization might be coming to an end. After all, "civilization" is another name for that "human world" that we create ourselves, and that we most immediately inhabit, and upon which our lives depend.

The fact that the end of civilization will likely come after I'm no longer around doesn't really change my feelings about the importance of the possible end to civilization. And who knows, maybe I will be around for the end of civilization, if things get even worse than the NASA study predicts. The .Mic article says that "we only have a few decades left before everything we know and hold dear collapses."

"Everything" is a lot!

The .Mic article goes out of its way to disabuse young people of any hope that technology might be able to solve our problems, and that technology, thus, might be our best way to avoid the collapse of civilization:


Here's the little phrase that got me (I put it in bolded italics in the quote above): "absent policy effects."

What the article is saying is that technology will not prevent the collapse of civilization unless some sort of "policy effects" are put into play.

What does that mean?

What that means is that we can prevent the collapse of civilization, but we can only do so if we change our "policies."

"Politics" is how we change our "policies," and the policies we establish for ourselves can, in very rapid order, change the world.

Let's not let those "policy effects" go "absent," or we are the ones who are going to disappear.