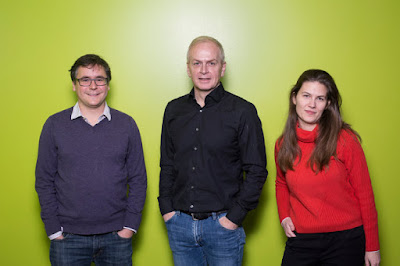 Pictured are (from left to right) Luis Ceze, Douglas Carmean, and Karin Strauss. Strauss and Carmean are both with Microsoft. Ceze has designed a new "DNA storage system."

The "DNA storage system" mentioned is not a system to store DNA. It's a system to use artificially produced DNA to store computer data. You can read all about it in an article in The New York Times published on December 4, 2015. The title of the article, in the hard copy edition of the newspaper, was: "Synthetic DNA Is Seen as Way To Store Data For Centuries."

It appears that all the digital information in the world can be stored in roughly nine liters of solution, "about the amount of liquid in a case of wine." Furthermore, the storage of data in this form will be stable for "centuries," which is quite a bit different from the data stored on magnetic media of various kinds, which degrade after only a decade or two.

If your great, great, great grandchildren want to learn what you bought your relatives for Christmas in 2015 (to take an example), that information might well be available to them once this new storage system is in place.

Actually, maybe not. Do we really want anyone (including governments through time) to have access to that kind of information on every one of us? There is already a problem with our existing systems of "big data," which can have the effect of stripping every human being of even a pretense of privacy.

Just because we can do it, and save every shred of information we have ever developed, and store it forever, doesn't mean we should. That was my first reaction to this news story.

My second reaction was to marvel at the grandeur of the "systems" that we most directly experience as "life." We are living things. There are lots of other living things in the Natural World, and we didn't make any of them. We do have rather signifiant creative powers, as human beings, and we make our own "human" world, residing inside, and dependent upon, the World of Nature that we did not create. Our best efforts to retain and organize information turn out to be minuscule when compared to the power of the systems that constitute life itself.

Maybe we should spend more time simply marveling at the World of Nature, instead of trying to harness it for our own projects. Nature's imagination outpaces our own!