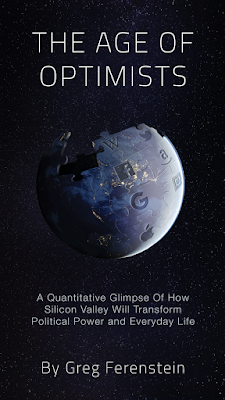 I am pretty impatient with the illuminati of the Silicon Valley who think that they have the solution to all our ills, including those associated with our failing "politics."

This "beta" publication by Greg Ferenstein presents itself as "a graphical summary of an online data-driven series about Silicon Valley’s political endgame: the path toward overhauling the Democratic Party and orienting our lives toward innovation."

Ferenstein reports with approval that the "Founders," as he calls them, "reject the notion that there are inherent conflicts of interests between citizens, the government, corporations or other nations."

Enough! Rich business people from the Silicon Valley cannot properly be seen as equivalent to the "Founders" of our nation, which is what Ferenstein implies. And "politics," as the real Founding Fathers saw it, is precisely intended to resolve what are, indeed, REAL conflicts necessarily part of a society made up of individuals.

Debate, discussion, conflict and controversy lead up to a decision, in the "democratic" model that has been the contribution of America to the world's understanding of government and human relations. Denying that there is any underlying conflict to be resolved is ludicrous.

In fact, claiming that there are no "inherent conflicts" in our society is worse than naive. It's arrogant. But, that arrogance is the feature of these pronouncements that make me impatient.

"Business benevolence," as our route to dealing with social issues, just doesn't jibe with the idea of democratic self-government. "Innovation," while sometimes very helpful, is not an autonomous solution to our difficulties.

In The Age of Optimists, Ferenstein quotes Eric Schmidt on religion. I'd like to suggest you read, instead, The Age of Reason, by Tom Paine. Or, if you want to think about what kind of politics might help us to confront our current situation, Paine's Common Sense still has lots to teach us. Paine was one of our real Founding Fathers.

Do we want a healthy and effective politics? We do. But there is NOT an app for that!