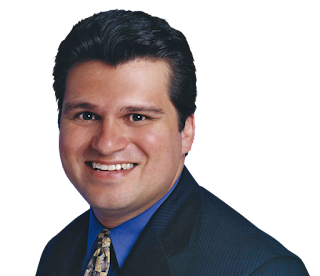 Ruben Navarrette, pictured, writes a political column for The Washington Post, which gets syndicated in at least one of the newspapers I read each morning.

On December 2, 2015, I opened up the San Francisco Chronicle to find his column titled, "An unserious country." Turns out that column ran in the San Jose Mercury News, too, the next day. The Mercury is another one of the papers I read. If you click the link to the story, above, that's where the link will take you.

I am not a big fan of Navarrette, generally, but his column on December 2nd qualifies as a new low, at least in my opinion. The column focused on the recent terrorist attacks in Paris, and Navarrette puts on his maximum snark to suggest that the people of the United States (its shopaholic citizens and its elected leaders alike) just don't seem to get how serious those attacks really were:

What the heck is he talking about? That was my initial reaction when I read those lines, which comprise the second paragraph of Navarrette's column. What can he possibly mean by saying that Americans are not "serious people" when it comes to those horrific attacks?

Well, here's what he means. With his great depth of understanding of foreign relations, Navarrette thinks "serious" means "war," "battles," "bombs," "violence," "killing," and "death." That's my conclusion after reading his distressing essay. His criticism is that our President "continues to play it cool."

Many consider an ability to "keep cool" amidst crisis a virtue, but not Navarrette:

Maybe Obama doesn't fully understand the threat. Or he doesn't want to worry Americans. Or he doesn't want to rush to war and repeat the mistakes of the former president he seems to admire least: George W. Bush. Or he knows he's a short-timer and doesn't want to start a prolonged military campaign he can't finish. Or he has checked out, and he is already thinking about building his presidential library, booking six-figure speeches and writing his memoirs. Here's my theory: Obama seems to be one of those peace-loving souls who are reluctant to give war a chance....


There you have it! Navarrette wants to "give war a chance."

Haven't we been there? Done that? Like in Iraq?

Seriously! This guy is out to lunch if he thinks that plunging into a war in Syria is any kind of way to address the attacks in Paris.

And "give war a chance?"

He's no John Lennon, either!