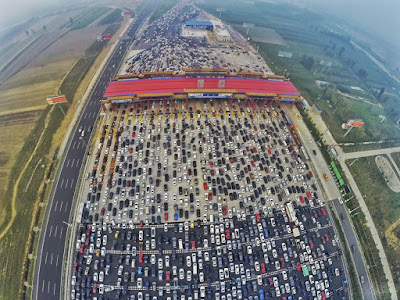 Liu Zhenmin, deputy chief of the Chinese delegation to the Paris Climate Conference, argued in Paris that it was important not to move too fast to deal with our global warming crisis. Among other things, Liu Zhenmin pointed out that this would "involve huge lifestyle...changes." He specifically stated, by way of example, that "You need to drive your car."

On December 8th, as I reported in this blog, Beijing experienced an air pollution crisis, directly associated with its combustion of hydrocarbon fuels. Furthermore, it may not be a lack of fuel that will prevent Chinese residents from "driving their car." Pictured above is a traffic jam in Beijing on October 6, 2015, as people attempted to return home at the end of a week-long national day holiday. Click here for more pictures!

Some of the changes that will go along with addressing our global warming crisis will be  huge improvements to our quality of life. Let's not be afraid to make the changes we need to make!