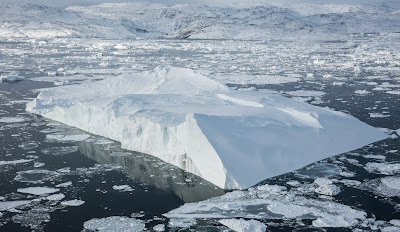 The New York Times Magazine sent writer Jon Gertner and photographer Olaf Otto Becker off to Greenland, to report on what's happening to the Greenland Ice Sheet. The article that resulted is titled, "The Secrets In Greenland's Ice Sheet," and I recommend that you hunt it down, and read it. The article documents what is happening in Greenland (and to some extent in Antartica), as global warming continues to accelerate.

The "secrets" being sought mainly involved what sort of evidence might be forthcoming about how "fast" our polar ice is going to melt away, and thus how fast sea level rise can be expected to occur. As Gertner says:

If the ice sheets on Greenland and Antarctica were to collapse and melt entirely, the result would be a sea-­level rise of 200 feet or so. This number, though fearsome, is not especially helpful to anyone but Hollywood screenwriters: No scientist believes that all that ice will slide into the oceans soon. During the last year, however, a small contingent of researchers has begun to consider whether sea-­level-­rise projections, increased by the recent activity of collapsing glaciers on the periphery of the ice sheets, point toward a potential catastrophe. It would not take 200 feet to drown New Orleans. Or New York. A mere five or 10 feet worth of sea-­level rise due to icebergs, and a few powerful storm surges, would probably suffice.

How soon could that happen? When it comes to understanding the implications of ice-sheet collapse, the speed of that breakdown is everything. It could mean sea levels that rise slowly and steadily, perhaps a foot or two per century, which might allow coastal communities to adapt and adjust. Or it could mean levels that rise at an accelerating pace, perhaps five feet or more per century — forcing the evacuation of the earth’s great coastal cities and producing millions of refugees and almost unimaginable financial costs. The difference between slowly and rapidly is a crucial distinction that one scientist recently described to me as ‘‘the trillion-­dollar question.’’

O.M.G. is the acronym for a five year program being headed by NASA, to try to answer that "trillion dollar question," and the acronym seems fitting.

While the acronym translates as "Oceans Melting Greenland," the preliminary results show that sea levels around the world will rise "much faster than previously estimated."

In other words, OMG!