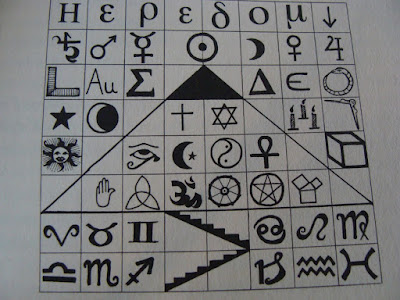 I listen to "Books on Tape" as I drive around, and I just finished listening to The Lost Symbol, by Dan Brown. Brown is the author of the Da Vinci Code, and other thrillers, but The Lost Symbol isn't situated in the Vatican; it takes place in our nation's capital.

Since I was a history major in college, with a specialty in American history, and with a particular interest in our revolutionary period, I definitely liked getting Brown's tour guide introduction to the many wonderful symbols that abound in Washington, D.C. The Lost Symbol never leaves the confines of the District of Columbia, and lets us see our beloved Washington landmarks in a new light. Readers will conclude that they didn't know as much about them as they thought they did. At least, that was my personal reaction.

Brown's plot, like his title, revolves around the pursuit of a "lost symbol," and of a single "WORD" that is supposed to provide access to the power of the ancient mysteries.

According to the Urban Dictionary, which decodes modern slang and fast-breaking new meanings of old expressions, "Word" is supposed to mean: "well said," and "you speak the truth." The use example given in the Urban Dictionary revolves around one person questioning another person's rather improbable claim to have had sexual relations with twelve females in a single night. In that context, "Word" means "Yes, it's true."

Dan Brown's word of power comes from the Bible, a copy of which Brown claims is encased within the cornerstone of the Washington Monument.

You don't have to be a Presidential candidate to quote the Bible (yes, I do mean you, Ben Carson), and in this case, the Gospel according to John (and as referenced by Dan Brown) seems to be saying that our words have power. As we speak, the creative power of our words can bring a whole new world into being.

The human world, the world that we create, is based, ultimately, on the words we pronounce, the words we tell ourselves, as we build a bridge of words from here to where we want to go.

There is power, indeed, in the words we speak. Maybe, as Brown seems to suggest, that is the secret heart of the ancient mysteries.