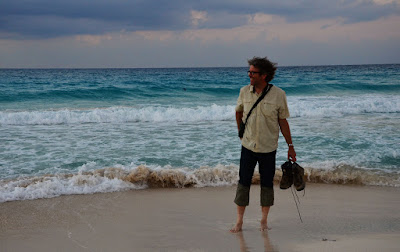 I have always enjoyed Franzen's novels, and his other writings, which I have generally seen in The New Yorker. I have not yet read Franzen's latest novel, Purity, but the events narrated in the novel are apparently largely based in Santa Cruz County.

The beach scene photo, above, which I captured from The Nation, appeared earlier in the August 19, 2015 edition of the Santa Cruz Sentinel. I think Franzen must be standing on a Santa Cruz County beach, though I can't identify it precisely. Whatever beach it is, I'd like to say to Mr. Franzen, "welcome to the neighborhood!"

As just reported, the photo heading today's posting came from The Nation, where it accompanied a double review of Purity and a critical biography focusing on Franzen's work, Jonathan Franzen: The Comedy of Rage, by Philip Weinstein. Weinstein teaches at Swarthmore College, which is where Franzen went to school.

The review printed in The Nation is largely focused on Franzen's thoughts about politics, as reflected in his writing. According to Jon Baskin, who wrote the review, Franzen's characters tend to be "agonized liberals" who are "skeptical of political conviction." As Baskin puts it:

The kind of liberal, white, relatively well-off Westerners who populate Franzen’s novels are haunted by the idea that their political decisions, including the decision to participate in politics at all, are discretionary.

My own view is that political participation cannot properly be thought of as "discretionary." Inevitably, we live together in the world we inhabit, and it is through politics that we decide what "we" are going to do. We live, as Bob Dylan puts it, in a "political world," and it is through our participation in politics, in fact, that we jointly create the world in which we most immediately reside.

Santa Cruz politics has, to a greater or lesser degree, at least during the past forty years or so, reflected the understanding of politics that I just articulated. Our community just might, in other words, have an important message for Jonathan Franzen, now that he's a full time resident.