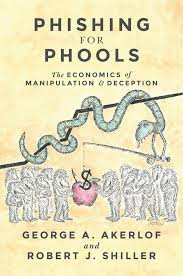 I found out about this recent book from a review in the The New York Review of Books. The review was titled, "Why Free Markets Make Fools of Us." Once again, I haven't (at least yet) read the book itself, but I can recommend the review!

Akerlof and Shiller are both Nobel Prize winners. They emphasize that economics and psychology cannot properly be separated, and say that if our understandings about human psychology were imported into our economic calculations, we would come to some different conclusions:

Akerlof and Shiller believe that once we understand human psychology, we will be a lot less enthusiastic about free markets and a lot more worried about the harmful effects of competition. In their view, companies exploit human weaknesses not necessarily because they are malicious or venal, but because the market makes them do it. Those who fail to exploit people will lose out to those who do. In making that argument, Akerlof and Shiller object that the existing work of behavioral economists and psychologists offers a mere list of human errors, when what is required is a broader account of how and why markets produce systemic harm.

Read the review to get the gist of the argument. I immediately honed in on the authors' conclusion, which emphasizes the "harmful effects of competition."

This observation, by these Nobel Prize winners, is consistent with my own belief that many of our political, social, and economic failures stem from our tendency to analyze everything from the point of view of an "individual."

In fact, as Congress Member John Lewis said at the recent New Yorker Festival, in his understated but inspirational way, "we are all living in one house, the world house."

Thinking anything else is going to make us "phoolish."