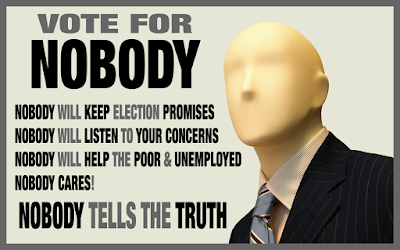 Forney's claims about politics aren't very persuasive (at least to me), being studded with observations like the following: "The average Democrat voter votes for Democrats because they think that the Democrats “care more” or whatever such nonsense. They’re clearly stupid." Besides the lack of attention to basic rules of grammar, the argument is founded on assertion rather than on any kind of demonstrable fact.

Mathews' claims need to be more seriously considered. Mathews was at one time a reporter for the Los Angeles Times, The Wall Street Journal, and the Baltimore Sun. He has also written a book about Arnold Schwarzenegger and his participation in what Mathews calls "Blockbuster Democracy."

Less universal in his denunciation of politics than Forney, Mathews doesn't claim that "all" politics is without value. His statement is much more specific. Mathews' article, in the October 6, 2015 edition of CityWatch, is titled, "Local Politics Is a Waste of Time."

I read Mathews' article and considered my own involvement in local politics (now admittedly twenty years in the past). Those who engaged in politics in Santa Cruz County, including me, most emphatically did not "waste their time." In fact, citizen involvement in politics fundamentally transformed the shape and character of community growth and development in Santa Cruz County. Other changes were also the result of politics. For instance, the establishment of a robust, community-based system of human services. Political involvement had consequences. Time was not wasted.

Mathews begins his article by a reference to the "polls," noting that polling results demonstrate that citizens and voters don't believe that political involvement is worthwhile. What people "think" about politics, and the "truth" about politics, just might be different. I want to suggest they are.

Here is how Mathews proceeds from the polling results:

The case against local political involvement is strong in California. Local governments have little power and discretion in our highly centralized and regulated state. We discourage political engagement at the local level by requiring local elections to be nonpartisan, thus keeping out political parties, the chief way human beings engage in politics. And the few decisions left to local governments are virtually always determined by the interests with money – developers and public employees.

Plus, in the Internet era, those who engage inevitably have to deal with online nastiness and personal attacks.

When you think about how little benefit derives from local political engagement in California, it’s no wonder that skepticism is rising in polls. What’s remarkable is that so many people still believe such engagement has real value.

Mathews is speaking, mainly, about politics in Los Angeles County, where each County Supervisor represents over two million people. Each member of the Los Angeles City Council represents over 700,000 people. It is, admittedly, hard to make local politics work at that scale. This, though, does not seem to be Mathews' argument. He thinks that local governments "have little power." That is where I think he is wrong.

When I was on the Santa Cruz County Board of Supervisors, I had 20% of the voting power. Two other Supervisors and I could do anything that a local county government was legally entitled to do, and believe me, there is a lot of scope there. Mathews is just plain wrong in saying that local agencies have "little power and discretion." To the contrary!

If you care about doing something politically, don't waste your time agonizing over the difficulties. Count the votes!

"Local" government is precisely "where it's at," in terms of getting something done. THREE votes (on the Board of Supervisors), or FOUR votes on the Santa Cruz City Council, can use the ample powers of our local agencies to do what the public wants their government to do.

There is a lot to do, and it takes just three (or four) votes to do it.

The job of the citizens is to get those votes.

If you don't want to waste your time, don't sit around waiting for elected officials to do something you might like.

The job of the citizen is to make the elected officials act.

You can do it. It works!