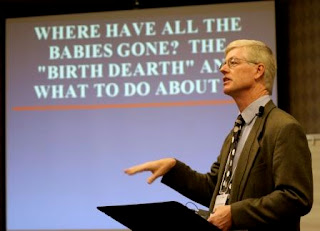 That September 24, 2015 edition of The Wall Street Journal, mentioned yesterday with reference to a review of Other People's Money, had another article of interest, as well.

A column by Ruchir Sharma, head of "emerging markets and global macro" at Morgan Stanley Investment Management, says that a "birth dearth" is sapping economic growth:

News reports suggest that the world is overflowing with people. Politicians in the U.S. and Europe talk about migrants—whether from Latin America or the Middle East—as a threat: They’ll steal jobs, depress wages and upend local ways of life. The backlash plays on deep-seated fears about a “population bomb.” The latest United Nations forecasts suggest that the global population will rise to 9.7 billion over the next 35 years, an increase of 2.4 billion. Where will they live, and what will they eat?

This narrative is sorely out of date. For much of the post-World War II era the world’s population grew at an average annual rate of almost 2%. But growth started to plummet in 1990 and is now running at about 1%—the lowest level in the postwar era—according to U.N. data. This collapse is seriously undermining potential economic growth ...

The "real" impacts on the natural environment of a constantly escalating human population are well known. Logically, in a world of limited natural resources, unconstrained population growth is not a benefit but a threat.

That observation, however, relates to the "real" world, not the world of finance.

Sharma's article ought to be seen as another invitation to "get real," which is absolutely not the message he is trying to promote. He is promoting growth in the "financial sector," the part of our economy that can be distinguished from the "real economy."

In the world of finance, continued and exponentially-expanding growth is a benefit. That's not the case in the "real" world, and sooner or later (and it had better be sooner), we need to find a way to live within the constraints of that real world, and to conform our behavior to the natural limits inherent in the World of Nature. Those limits include, just to take an urgent example, the limited ability of the natural world to absorb carbon dioxide emissions released by the combustion of hydrocarbon fuels, without a result that will destroy human civilization and bring our planet to the "Sixth Extinction."

"Economic growth," based on the continued depletion and destruction of the natural environment that sustains all life, is not an objective we should be pursuing! A "birth dearth" is not our big problem!