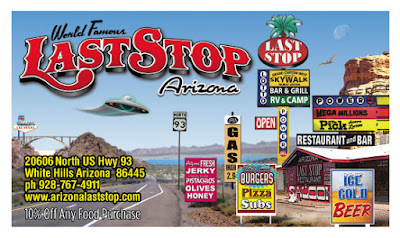 I would have thought that the World Famous "Last Stop" in White Hills, Arizona was basically just a place to get beer and gas, and maybe some beef jerky, olives, or honey. Check out that signage! Isn't that what you'd think, too?

As it turns out, the "Last Stop" is world famous because families bring their children to the "Last Stop" from all over the world to shoot 50 millimeter machine guns. Here is some background from a story in The New York Times:

Antonio Nárdiz, a Spanish tourist from Bilbao, said he had chosen a family vacation to America for one specific reason: to fulfill his sons’ dreams of firing real machine guns. In Spain, he noted, 10-year-old Jon and 12-year-old Toni, like all other civilians, are forbidden to use automatic weapons. 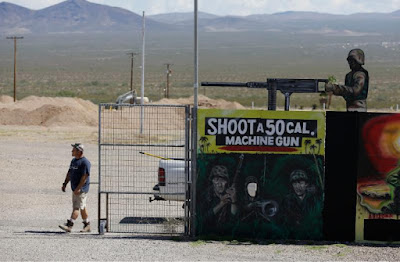 Last year, a 9-year-old New Jersey girl (living the dream) visited with her family at the "Last Stop," and lost control of the Uzi submachine gun she was firing. The upshot was that she managed to kill her instructor. Mr. Nárdiz had heard about this, so he called ahead to ask about security. Someone told him, “It’s practically impossible for an accident to occur.” So glad to hear it, I bet he thought, as he booked the flights for his family!

The "Last Stop" isn't the only place where you can shoot machine guns in the Las Vegas area. How about "Bullets And Burgers?" Click the link to see their website.

Bullets And Burgers is highly recommended, according to what the website says, at least.

I think my oldest grandson might (if allowed to dream such dreams) like the idea of shooting machine guns. My granddaughter might like that, too. She's almost nine years old, so maybe next year?