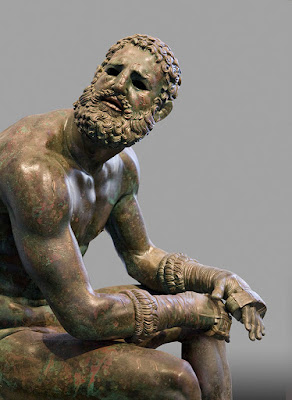 The bronze shown, of a boxer, is part of an exhibition at the J. Paul Getty Museum in Los Angeles. The exhibition is titled, Power and Pathos: Bronze Sculpture of the Hellenistic World, and it will run until November 15th of this year.

I found out about the exhibition from a fine column by Roger Cohen, which appeared in The New York Times edition of August 23, 2015. Cohen called his column "California Dreaming," but the column is not really about California. It is about change.

Cohen rehearsed both sides of the argument that I often had with my father: Is the world radically and fundamentally changing (this was my claim, and I always thought that the changes were mostly for the worst), or (as my father consistently argued) have things pretty much "always been this way?"

Cohen ultimately comes down on my father's side of the argument, and it is actually comforting, I think, for any son to find his father's viewpoints validated:

The catalyst to these musings was something I saw in Los Angeles, probably the last place I expected to see it because I think of the city as hot-wired to the new and inclined to the brittle. It was a bronze statue from the third century B.C. of a seated boxer, a life-size rendering of a bearded man who, to judge from the bruise on his cheek and his broken nose, has just emerged from a fight, or perhaps a series of fights. His body is strong, suggestive of the heroic, but his expression is excruciatingly human, full of stoicism and questioning.

Here I am, the boxer seems to say, and such is life: an unpredictable struggle for survival in which there is no escape from hard work and wisdom must be earned the hard way. You see, he murmurs across 2,300 years, I have done what I had to do and this is the state I find myself in: tired, battered but unflinching and alive.

The boxer made me think of one of my favorite paintings, Velázquez’s portrait of Pope Innocent X in Rome’s Doria Pamphilj Gallery, not in any particular detail but in the evocation of someone who has lived life to the full: the ruddy and weathered face of the pontiff, the shrewd eyes, the expression that says he sees through the pomp of his position and is aware that life, even at the summit of power, may be viewed as a cruel joke. “Troppo vero!” — “Too true!” — the pope is said to have exclaimed on seeing it.

My late uncle, Bert Cohen, was in Italy during World War II. On July 21, 1944, he reached Monte Cassino and wrote in his war diary: “Poor Cassino, wreck and desolation unbelievable, roads smashed and pitted, mines, booby traps and graves everywhere. Huge shell holes, craters filled with stagnant slime, smashed buildings, hardly outlines remaining, a silent sight of ghosts and shadows. Pictures should be taken of this monument to mankind’s worst moments and circulated through every school room in the world.”

Along with pictures of the Hellenistic boxer and the Italian pope to illustrate the illusions of power, the bruises of life, the persistence of hope and the limits of change. Relax — we’ve been here before. 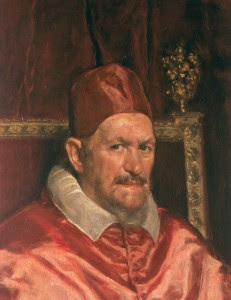