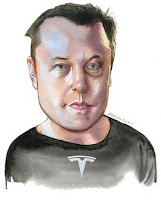 Elon Musk, pictured, is pioneering in lots of high-tech areas. He has "created the world’s leading electric car company, Tesla Motors," and he "conceived and is the board chairman of SolarCity, the country’s premier solar services company.” Musk has also "founded, funded, and runs ... SpaceX."

I am quoting here from an article in The New York Review of Books, titled "The Man For Mars."

The book being reviewed is Elon Musk: Tesla, SpaceX, and the Quest for a Fantastic Future

, by Ashlee Vance. It's not clear from the review whether or not the book mentions the "hyperloop," another one of Musk's far out visions, and one that seems to be moving from theory to reality.

I am not much enamored of efforts to colonize space. I'd rather focus human efforts on the task of making sure that we never have to flee Earth for other planets, or even other solar systems, to avoid the messes we've created right here.

It may be that Musk isn't hoping to escape the messes, however, but to export them. I couldn't help but chuckle when I learned, from the article in The New York Review, that "Musk is not envisioning a colony of a few hundred settlers on the Red Planet, but one on the order of Hawthorne, California, the 80,000-plus industrial city outside of Los Angeles where SpaceX has its headquarters."

Check out a picture of Hawthorne, below. Frankly, I'd hate to see that duplicated on Mars, even if all the cars were electric! 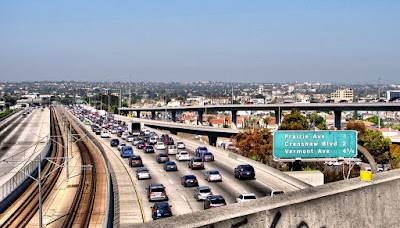