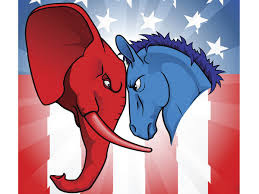 As I mentioned in my posting yesterday, I now know the meaning of the word "derp." Derp is an adjective (impliedly derogatory) meaning that the idea or activity to which it is applied is "of, consisting of, or supported by members of two parties, especially the two major political parties."

Today, let me tell you a true story about the difference between a Democrat and a Republican.

In 1988, I was on the UCSC campus, registering UCSC students to vote, hoping to get them to support Proposition 70, the so-called "CALPAW" initiative, which when ultimately passed that year provided the funds to purchase the Pogonip property and permanently to preserve it. You can read a nice little write up on CALPAW, and Pogonip, by clicking right here.

I vividly remember this incident, because it was so striking. I was in the Crown College courtyard area, and was stopping students walking by, asking them whether they were registered to vote, and then urging them to register if they weren't. I had the forms with me, and I was doing a pretty good business.

When a person registers to vote, he or she must indicate a political party designation (or indicate that the newly-registered voter wants to "decline to state"). Legally, the person doing the registering (me in this case) is not supposed to tell the person who is registering how they should fill out that party designation. One student, a young man, had decided to register, and when he got to the end of the form, and reached the party designation question, he directly asked me, "What party should I fill out? Am I a Democrat or a Republican?"

This was a private conversation, and I remember pausing right after he asked me the question. I was, I confess, tempted to tell him "Democrat," my own party, but I didn't do that. In fact, before I could say anything, an African American woman student, who had been moving full tilt right past us, suddenly stopped in her tracks, and turned back around.

"No," is what the student holding the form replied.

That's a real life story, and while this system is not infallible, it's certainly one way to think about the difference.