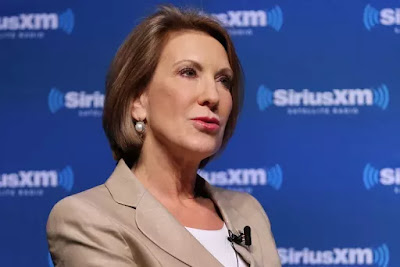 The picture is from an article published online in Vox - Energy & Environment. It is a picture of Carly Fiorina, of course, one of the many candidates for the Republican Party nomination for President.

Californians know Carly. She was the Chief Executive Officer at Hewlett-Packard until fired. She ran against Barbara Boxer as a candidate for the United States Senate. She didn't do very well in either of those endeavors, but I'm told that the Republicans really like her in her latest incarnation.

If at first you don't succeed, try, try for President!

The article in Vox focuses on Fiorina's most recent statements on climate change. According to Vox, "everything she said was wrong." If you'd like to read the article, click here and judge for yourself.

I mention the article not because I want to spend any time talking about Carly Fiorina (I, personally, have no use for her). Rather, I was intrigued by a word used in the article, and used as if everyone must know what it means: "derp."

I am making an honest effort to keep up with popular culture, but I am definitely coming from behind. According to the Urban Dictionary, "derp" should really appear, orthographically, as "DeRp," and I gather that it is an adjective meant to apply to any idea or activity "of, consisting of, or supported by members of two parties, especially two major political parties: [as in] a DeRp resolution."

"Derp" also appears to have some sort of tie in to the adult cartoon television show South Park, a show I have never watched, with this fact pretty much proving how out of touch I am with popular culture. I gather, from watching the following video, that "derp" may well mean a person who is stupid or who acts like an idiot.

Maybe "derp" is a good word to describe someone who doesn't know there is a difference between what the Democrats and and the Republicans are supposed to be all about.

Watch the video, and then watch out for any derp ideas that come your way, from Carly Fiorina, or anyone else!