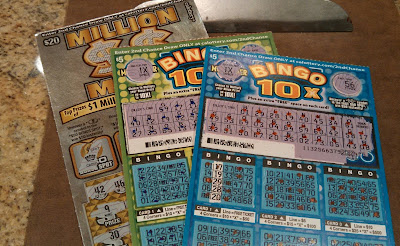 Yesterday, I complained that bankers have turned what used to be thought of as "investments" into "bets," and in doing so have sabotaged our entire financial system. Shortly after writing down my complaint on that topic, I found that the California Lottery is going to help bankers get into gambling more directly.

An editorial in the August 4th edition of the San Francisco Chronicle announced that the Lottery is now allowing people to buy lottery tickets at the gas pump, using their credit cards. If the Chronicle is correct, this is the first time that the Lottery has ever allowed players to buy tickets with something other than cash. I join the Chronicle in thinking that this is unseemly, and maybe even "outrageous," and that our state government should not be taking advantage in this manner.

As the Chronicle's editorial says, going into debt for a very long odds chance to win big bucks is a "sucker bet." So our state is now trying to rip off the suckers! The bankers behind the credit cards are right there, too, undoubtedly glad to fund these wagers, since it's pretty much a sure thing for the banks. Eighteen percent interest, or more, for money to gamble! Pretty despicable, I think.

At least it's unlikely, or so I hope, that the banks are going to send out someone to cut off the fingers, or break the legs, of defaulting debtors.

Maybe that's one good thing about this new scheme to make money from the poorest of our society, driving them to bankruptcy as they wager the money they don't even have for one of those "sucker bets." 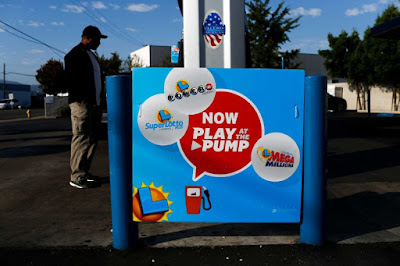