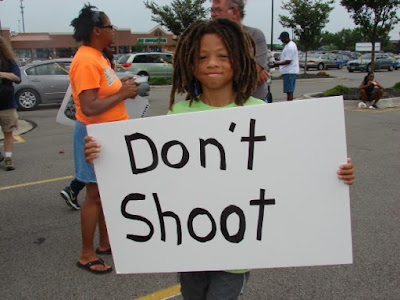 Shortly after writing the blog post that appeared here yesterday, I read an article in The New York Times that provides at least some explanation for why so many civilians (especially black civilians) seem to be getting shot by police officers, even when the civilians aren't really doing anything that would even suggest that they pose a danger to the police officer involved.

As it turns out, police officers are being trained, explicitly, to "shoot first."

The Times article, which appeared in the Sunday, August 2, 2015 edition, is well worth reading. I recommend it.

William J. Lewinski, profiled in the article, calls himself a "professor," and heads up a company called the Force Science Institute. Lewinski's company provides training to police officers about how and when to use deadly force, and if a police officer's use of deadly force is ever questioned, Lewinski will act as an expert witness, defending the officer's actions. He has been incredibly successful in persuading juries, and others, that officers who kill unarmed civilians are acting in a legal and responsible way.

Here is the lead paragraph in The Times' article, which makes clear the kind of approach that is recommended by Lewinski and the Force Science Institute:

The shooting looked bad. But that is when the professor is at his best. A black motorist, pulled to the side of the road for a turn-signal violation, had stuffed his hand into his pocket. The white officer yelled for him to take it out. When the driver started to comply, the officer shot him dead.

The driver was unarmed.

Taking the stand at a public inquest, William J. Lewinski, the psychology professor, explained that the officer had no choice but to act.

“In simple terms,” the district attorney in Portland, Ore., asked, “if I see the gun, I’m dead?”

Doesn't look like the District Attorney was on the side of the victim here, does it? The implication is that this police officer was not subjected to any further legal proceedings, after Lewinski's testimony at the inquest.

If the public is in charge of the police, instead of the opposite, then I think that the public had better start looking into what sort of training their local law enforcement personnel are receiving. Law enforcement officers with guns do have the ability to make life or death decisions, affecting anyone who forgets to signal for a turn, or who otherwise comes into contact with the police.

Do we really want our police to follow the "shoot first" rule?

I think the little girl in the picture at the top of the column has a better lesson plan!