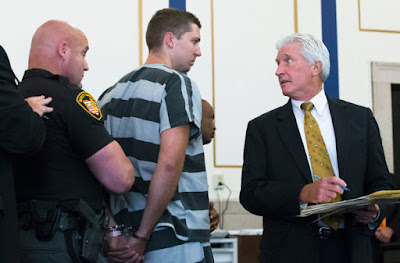 Pictured is Ray Tensing, formerly a University of Cincinnati police officer. Tensing is now accused of murdering Samuel DuBose, a black man, in connection with a routine traffic stop.

The online version of The New York Times article from which this picture was taken includes a composite set of videos clips. These clips show recent police-civilian interactions in which black persons ended up dead, mostly because they were killed by police officers, and usually after being stopped for what were apparently minor incidents, vehicle-related and otherwise. The video of police breaking up a swim party in which young black people dared to use a swimming pool in a white area of town, is another recent example of what seems to be a disturbing pattern of police-civilian interaction. Luckily for the black teenagers involved in that incident, none of them were killed. At least one officer drew his gun, however.

A deep-dyed racism is, I think, clearly one of the underlying motifs in these recent police killings. Racism is mainly what led to all of the killings and deaths in The Times' composite. However, I don't think that this the only operative factor in these, and similar, incidents.

The full video on the DuBose killing shows a police officer putting a bullet into Mr. DuBose's head largely because Mr. DuBose irritated the officer by not producing his vehicle license. Mr. DuBose did nothing physically aggressive, and neither did Sandra Bland. Bland was a woman driver who "talked back" to the officer who arrested her for the alleged violation of changing lanes without a signal. For that infraction (if it actually occurred at all), Ms. Bland was pulled from her vehicle, arrested on the scene, and then incarcerated in a local jail for three days, where she allegedly committed suicide while in custody. Both Mr. DuBose and Ms. Bland were black. So were the others shown in The Times' video compilation.

This horrendous and disturbing video is just a slightly different version of what has happened in most of these recent incidents (again, most of them, but not all of them, involving black civilians and white police officers). An officer stops or attempts to stop someone, with or without a good reason to do so, and the person is not deferential enough to the officer (in his or her opinion), so the civilian is killed.

Something is wrong with the training that we are providing to our police officers. Police agencies often operate under a rubric of "protect and serve." Whether they make that statement as an "official" commitment, or not, that is what we expect of our public safety personnel. We, members of the public, in other words (and that means all of us, black and white, deferential and non-deferential individuals among us) rely on the police to "serve" us.

In fact, as the District Attorney has determined in Cincinnati, it's murder.