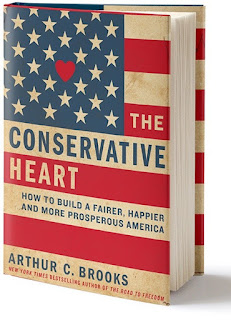 I have not read The Conservative Heart, by Arthur C. Brooks. As you can see from the photo, there definitely is such a book, but I am not recommending it. I am not planning to read it, either.

I just happened to come across this book, and seized upon the photo as an illustration for today's blog posting, as I was trying to track down information about Brooks. As it turns out, Brooks is the President of a leading right-wing think tank.

Brooks sounded off in the "Sunday Review" section of the July 26th edition of The New York Times, in a column titled "We Need Optimists." I think the column is worth reading, and it's worth pondering the proposition that Brooks is advancing.

We need optimists in our politics, says Brooks, and he identifies both President Reagan and President Clinton as the kind of optimistic politicians he'd like to see. According to Brooks, politicians of all parties are emphasizing the "dark side," and it's bringing us down. Hence, Brooks' title: "We Need Optimists." The illustration The Times used, to head the column, was not a picture of Brooks' book. It was a picture of President Reagan with a superimposed "Happy Face." 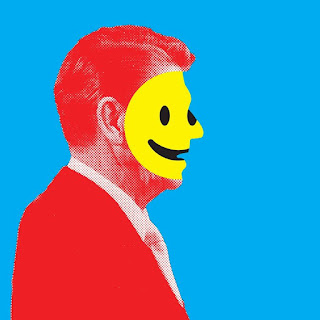 I take the issue raised in Brooks' column seriously, since my friends often suggest to me that my Two Worlds blog tends to be focused on "the dark side." It's a fair statement, and I must admit that I am not a fan of "Happy Face" politics.

Telling the truth is always high on my list of what I like to see in politicians, and telling the truth is sometimes not compatible with highly optimistic statements. What's to like about drilling the Arctic at a time of global warming crisis, when we are in the midst of the "Sixth Extinction?" Forget the "Happy Face;" this is not going to turn out well.

However, lest anyone reading this posting think that I am a "pessimist," I'd like to disabuse them of that notion right now. I am the opposite of pessimistic, because no matter how dark the "dark side" gets (and it's pretty dark out there, my friends), I take my stand with Hannah Arendt, in her essay, "What Is Freedom?"

It is not in the least superstitious, it is even a counsel of realism, to look for the unforeseeable and unpredictable, to be prepared for and to expect “miracles” in the political realm. And the more heavily the scales are weighted in favor of disaster, the more miraculous will the deed done in freedom appear. It is men who perform miracles—men who because they have received the twofold gift of freedom and action can establish a reality of their own.