The article I discussed yesterday was about cloud producing machines, to be tested in Moss Landing, if the scientists involved get their way. The gist of the article was that human technology could quite possibly eliminate or significantly mitigate global warming, and this article was given front page treatment. On Page 18 of that same edition of the Mercury (on the Opinion page) was an article by Todd Dwyer, a high school economics teacher who lives in Santa Clara. Dwyer's article was a warning: "ARkStorm, not quake, may be next disaster."

This ArkStorm disaster warning is more or less California-specific. As Dwyer says, bad as our current drought is, the opposite could be even worse. A so-called "ARkStorm" is a cataclysmic flood event, and California did experience such a cataclysmic flood event in 1861 and 1862, when a storm that began on Christmas Eve in 1861 delivered torrential rains that continued for forty-three days. Click this link for more about ArkStorms.

If our forecasted El Nino actually does happen next Winter, as now predicted, Dwyer says that we "need to be careful for what we wish for." An event like that of 1861-1862 would mean that "the City of Fresno would be submerged. Homes in the Los Gatos mountains would overlook a San Francisco Bay that would engulf Menlo Park, much of Palo Alto, Mountain View, Milpitas, Sunnyvale, the City of Santa Clara, as well as large portions of downtown San Jose." I think we can reliably predict that the San Lorenzo River would put a good part of the City of Santa Cruz under water, too.

For me, there was a kind of relationship between the two stories. On Page One, scientists are shown as working to bring a completely untested technology to bear on a problem of truly global proportions.  The impression created was that human technology will provide us a way to deal with even the most difficult problems in the World of Nature.

Further back in the paper, Dwyer's article documents a natural disaster that really did happen, and that scientists seem to agree will happen again, sometime in the future. You would think that such a California-specific disaster should be much more manageable than the worldwide disasters we know will be associated with global warming, but the impression created by Dwyer's article is that there really isn't very much that we can do to prevent the inevitable damage that will accompany an ARkStorm. The way Dwyer seems to tell it, Nature is just going to dwarf our efforts to control it.

It seems to me that Dwyer is conveying a more accurate idea of Nature than the cloud machine article. We're not in charge. Nature is. 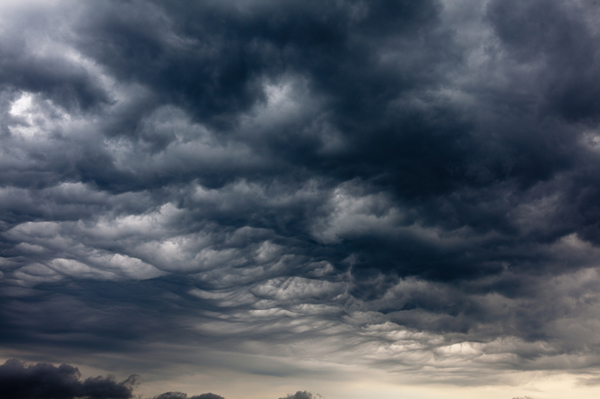