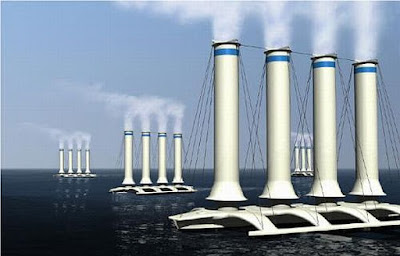 A couple of weeks back, the San Jose Mercury News ran an article on the front page of its Sunday, July 12th edition. In the print edition, the title of the article was "A Lofty Idea To Save The Planet." The title that the Mercury provided for the online version is a lot less grandiose. That title says, "Climate change: Controversial 'cloud brightening' project proposed for Moss Landing." Click the link to read all about it.

If it is true that human activity (mostly our combustion of hydrocarbon fuels) is now causing significant global warming, and that this human-induced temperature rise around the world is threatening not "the planet" so much as those human arrangements that we usually call "civilization," then the obvious solution is to follow that "First Rule of Holes," and to stop burning hydrocarbon fuels as quickly as we can. Actions that would accomplish that result are actions that can be taken within the "human" or "political" world over which we have dominion. To deal with the problem that we have caused, in other words, we would have to change our behavior.

The "bright idea" of the scientists who want to build machines like the ones pictured above is to deal with global warming by reprogramming Nature. The machines they propose would "hurl tiny seawater droplets into a graceful trajectory ... to boost the brightness of clouds to reflect rays of sunlight back into space." Presto Change-O! No need with this plan to reduce the atmospheric carbon that is heating up the planet because that carbon cover prevents the hot energy of sunlight, once it has hit the Earth, to escape back into space. Instead, we will just prevent a certain amount of that sunlight from ever hitting Earth in the first place. No sun; no heat. We're cool!

When the hell are we going to learn that we need to live within the constraints of the World of Nature, instead of thinking we can find some cute shortcut to avoid the laws that govern its operations? We are not in charge of the World Nature. In fact, it's in charge of us.

When we turn to that "human world," the world that we have created, we actually can change our own behavior. How about trying that out?